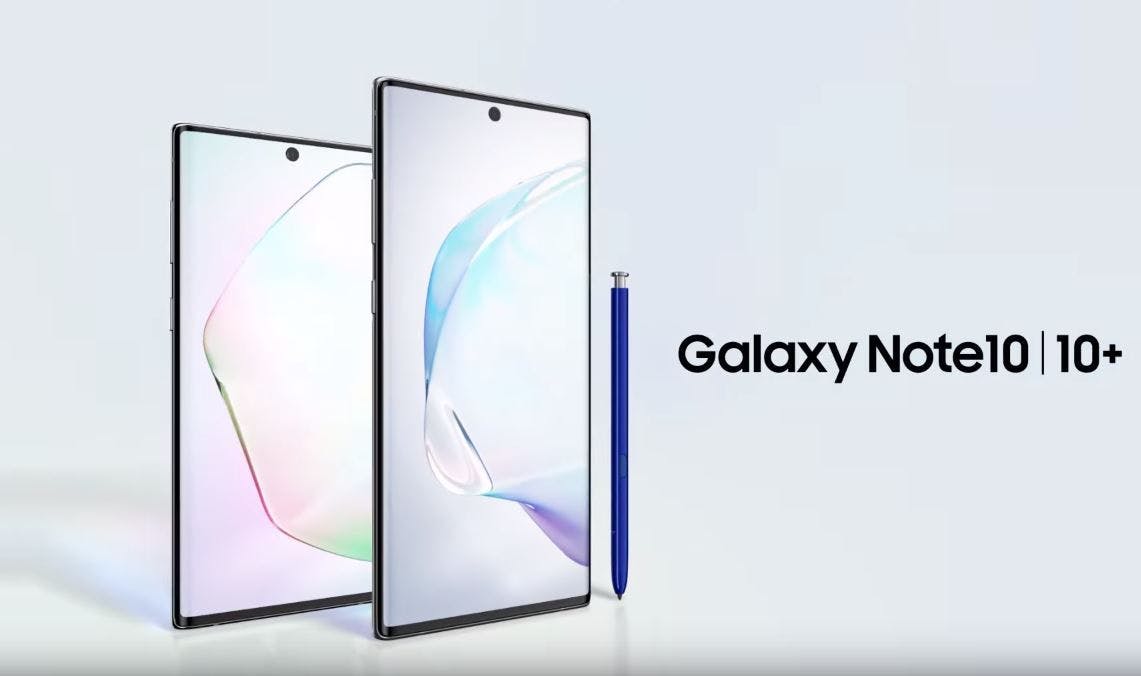 Samsung took to the stage in Brooklyn, New York to announce the most powerful Note devices ever. From the keynote and all the announced specifications, it is clear that Samsung is going for bigger and bolder. These two powerhouses are aimed at buyers who love big screens, can't live without a stylus and know exactly how to squeeze every single bit of power out of the Note.

Cutting to the Chase

If you were to hold the Note 10 devices next to a Galaxy S10, you would immediately notice that Samsung made the cut-out for the 10MP front camera smaller than those of the Galaxy S10 devices. It is now positioned in the middle of the AMOLED HDR10+ panel as leaked information suggested ahead of the announcement. Both Note 10 devices come with an Infinity-O screen, and to match the S10 family Galaxy Note 10s have their fingerprint scanners hidden under the display. You can share power wirelessly as well and charge Samsung accessories using your Note 10. 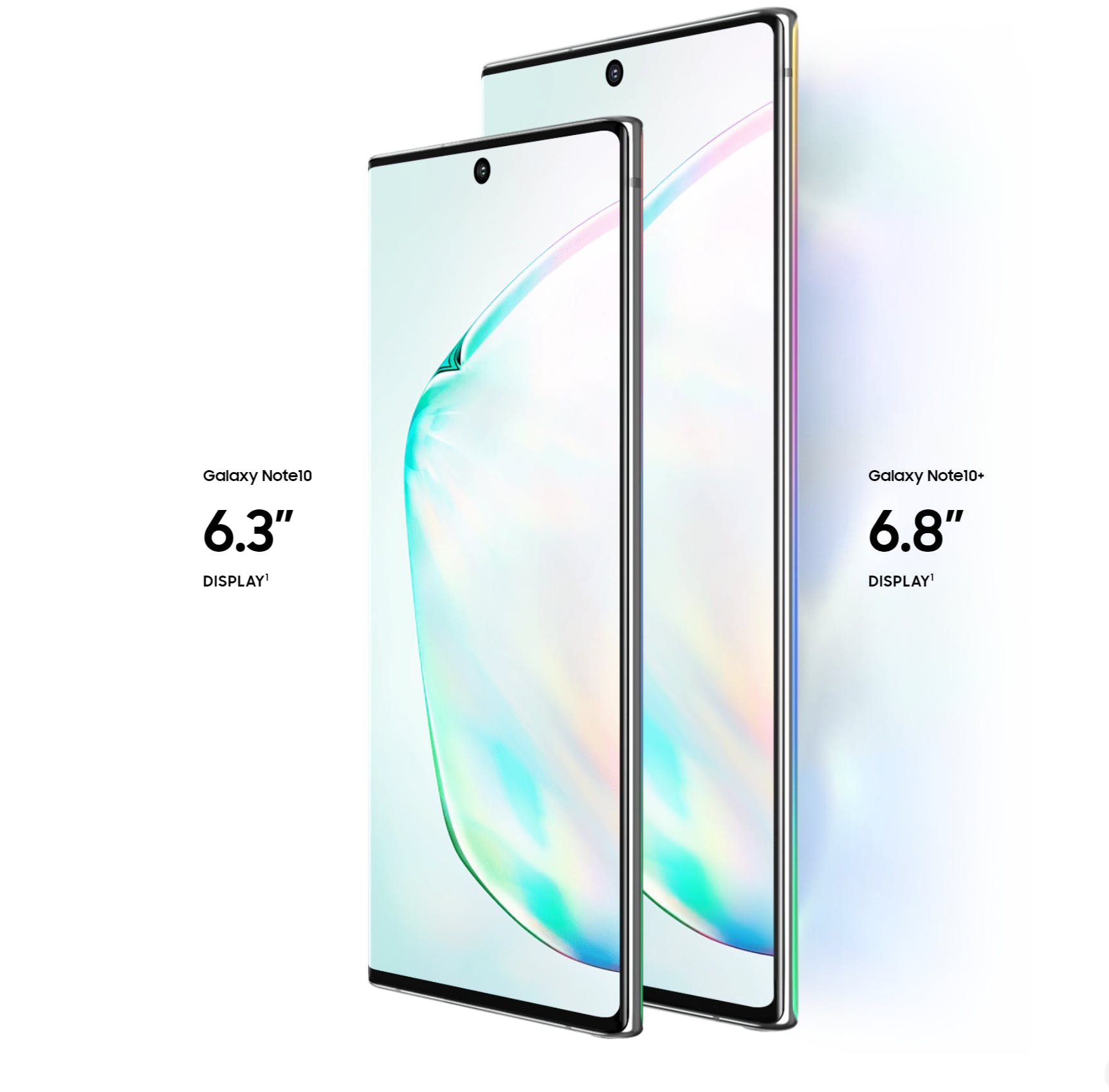 Unfortunately, there are also a few additional small, but at the same time, big changes to the design that not many Note users will like. The Galaxy Note 10 devices mark the end of the 3.5mm headphone jack, and it looks as though Samsung won't bring it back. On the right edge of the devices you won't find any buttons, only a clean edge. The left edge houses volume rockers and the button that we all used to press to power off our phones is now _drum roll please_ a Bixby button! The power button got relocated to the drop down navigation bar on the Note 10. 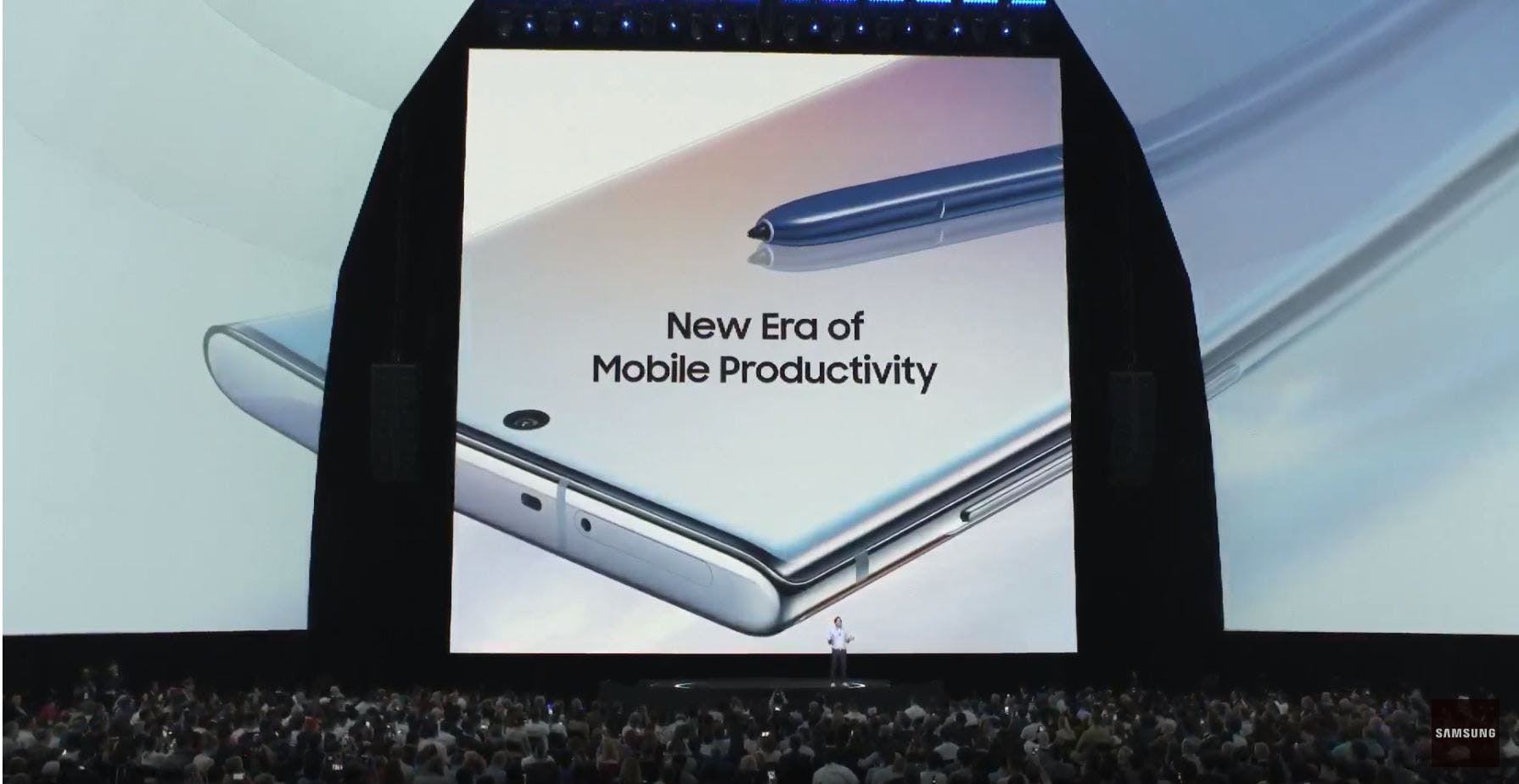 Samsung have partnered with Microsoft to bring PC-like experiences to the Note 10 devices and you can easily use your phone on a Windows computer by clicking on the "Link to Windows" button on your navigation bar.

The camera app on the Note 10+ now has 3D scanning and AR capabilities. Video recording has been improved with bokeh effect application, and Samsung have built-in an entire editing suite. You can also film with the wide-angle lens if you want to achieve a fish-eye effect.

It wasn't an accident that the S Pen was featured in all the teasers prior to the announcement. The stylus has additional tricks such as motion tracking which allows you to control apps such as the camera app or YouTube without even touching the handset itself.

For the first time since the Note 3, Samsung have released a mini Note 10 and a plus model. During the keynote you probably wouldn't have noticed any major differences between the two, however Samsung didn't just release two devices for the sake of it. There are certain features that could swing your decision towards getting a Note 10+ if you're thinking of upgrading this year. 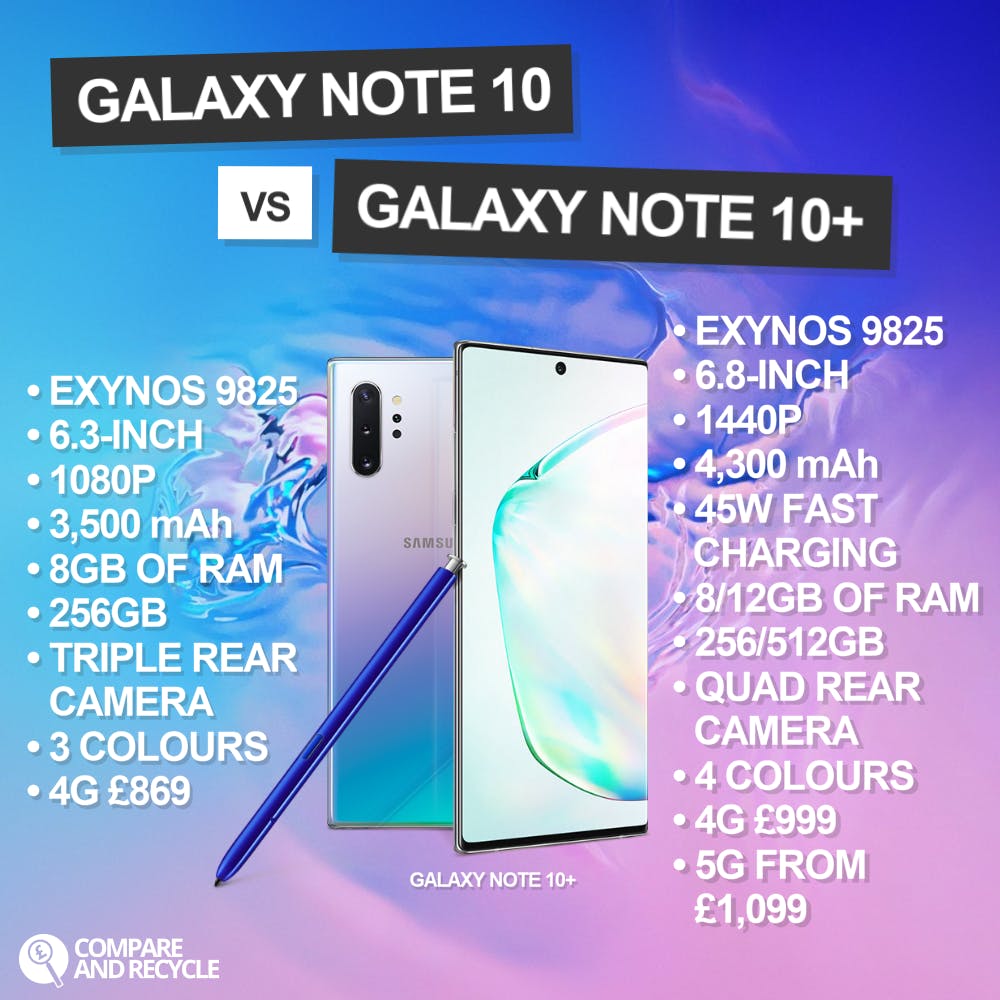 Although both Note 10 smartphones are powered by Samsung's 7nm Exynos 9525 chipsets in the UK, that's pretty much the only similar thing these superphones share. The smaller Note has a 6.3-inch Infinity-O display and a 3,500 mAh battery with 25W charging. The plus Note gets a bigger screen of 6.8-inches, faster charging speeds of 45W (charger sold separately) and a bigger 4,300 mAh battery, which makes sense as this model is larger. With the Note 10, you will be stuck with 256GB of internal storage and 8GB of RAM. Don't get us wrong, these specs are some of the best on the market, however the Note 10+ has a few more options to choose from: 8GB or 12GB of RAM and up to 512GB of internal storage with the ability to expand it even further (only the Note 10+ has a micro SD card slot).

This year, it seems as though Samsung have opted to focus on improving video capturing on the Note 10s. The bokeh effect (blurred background) can now be applied to video footage and when you zoom in, both the image and audio can be focused on. The camera can now also predict movements for smoother-looking footage, using a built-in gyro sensor which stabilises the footage. There is also an entire editing suite built-in.

The depth camera sensor on the Note 10+ enables an augmented reality content creation feature called "AR Doodle" which allows to add AR drawings to your video or image in real time. The drawings get locked to the object and if the object moves, the AR drawings move as well. The device is able to sense its surroundings and can add shadows to the drawings. Samsung has added 3D scanning of objects which will be used mainly for fun by general users or to level up creators' content. 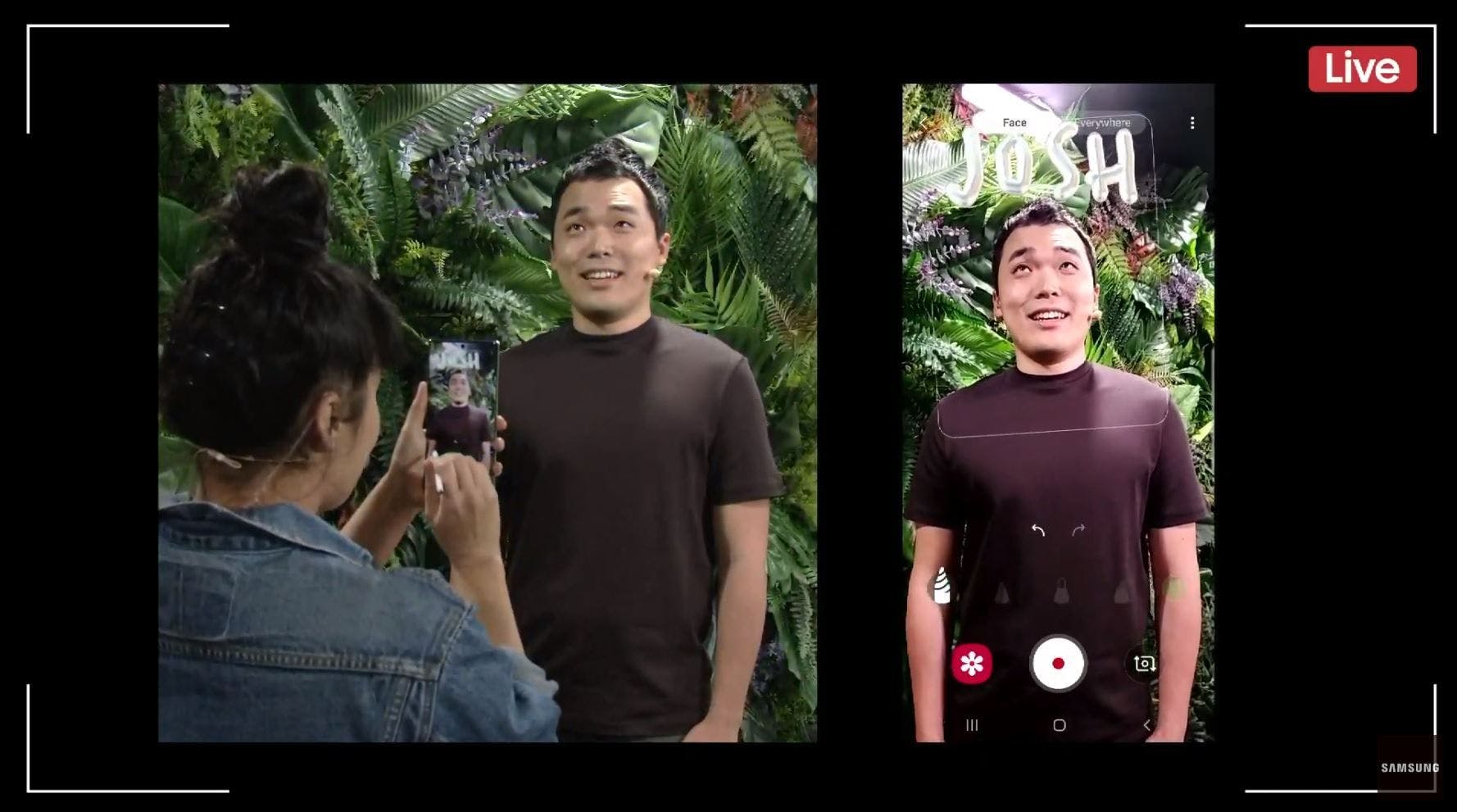 The new Note 10 smartphones are available for pre-orders, but if you want to play around with them before you commit to buying one, the Note 10 and Note 10+ will land on the shelves of retail shops on August 23rd. 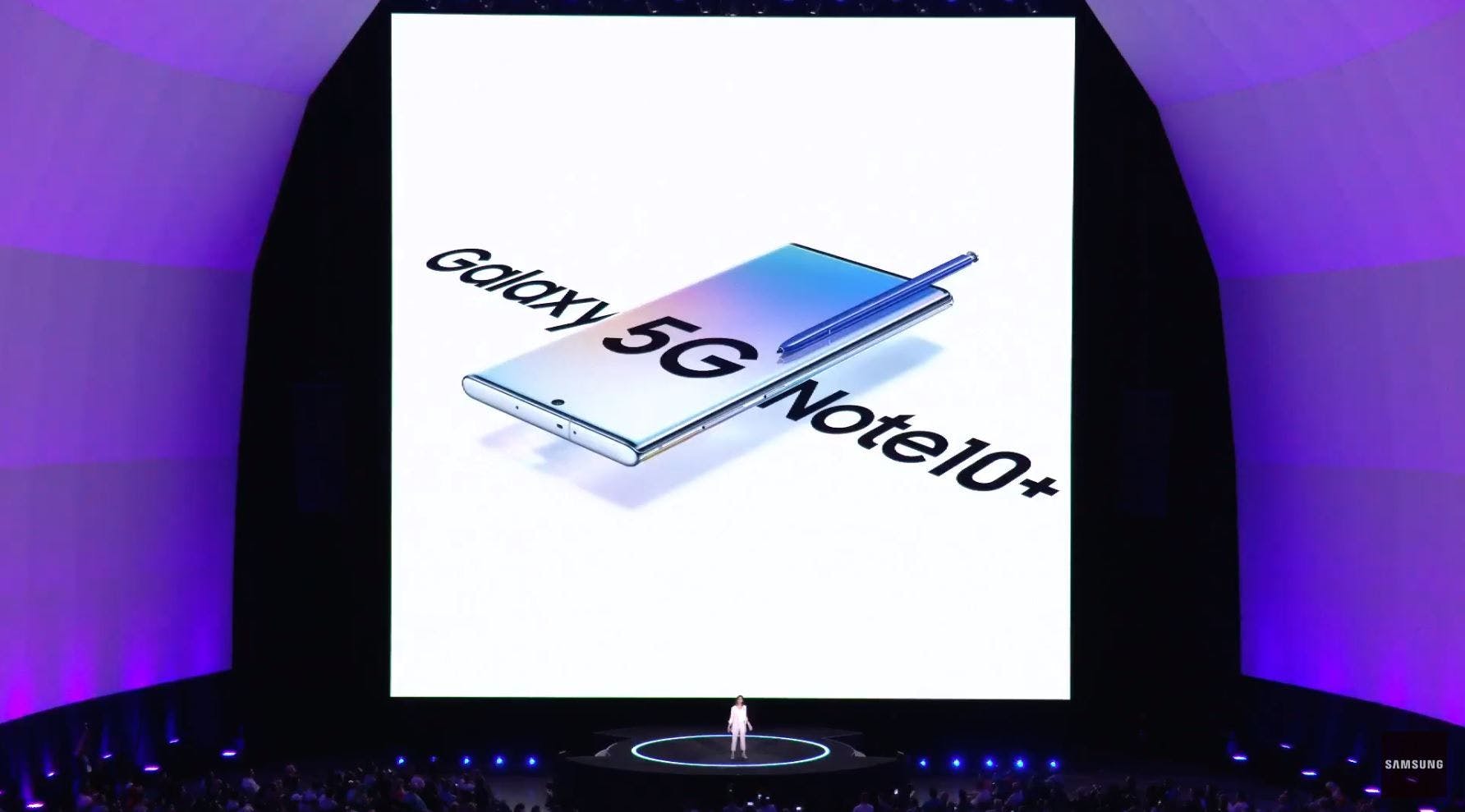 Frankly speaking, if you're not a die-hard Note fan already, Samsung didn't put too much effort in to attract new buyers. Undoubtedly, both Note 10 devices have improvements over their predecessor in various areas, however there's not much in the way of impressive technological advancements. We were expecting Samsung's answer to the OnePlus 7 Pro's amazing smooth screens, but this hasn't happened, even though Samsung is capable of carrying this out. Nonetheless, Note 10 devices are a great addition to the Note series and it is indeed the best Note you can get right now. If you think this is the Note you want to go for, don't forget that you can save on your upgrade by recycling your old phone.