We make the process of recycling your devices easier by providing a list of more than 30 different recycling companies on the market by price and customer ratings. We ensure that you’re informed about which company is offering you the best deal for your device.

Our goal is to motivate everyone to recycle their devices once they’re finished with them, as this not only has a financial benefit for you, but it also goes a long way towards protecting the environment.

When you recycle your device, you’ll get money for it which you can put towards a new one or towards something else entirely. Besides this, recycling your old devices will prevent them from getting left in landfill sites, which would contribute to the increasing piles of e-waste around the world. Electronic devices contain hazardous materials which can contaminate air, water and soil if they’re not recycled responsibly. Moreover, with every new electronic device that’s made to meet the frenetic demand for new devices every year, this adds to the increasing CO2 emissions from electronics manufacturers around the world.

The idea of helping customers get the most cash to sell their phone online was conceived back in 2009. The number of online phone recyclers was growing rapidly, and prominent TV advertising campaigns from phone buyers like Envirofone and Mazuma meant that consumer awareness was on the rise too.

While there were plenty of companies offering to buy phones, finding the best deal required searching each website individually. It became clear that the entire process could be far quicker and easier, which led to the idea of creating a comparison site which could display all the prices on offer in one place.

After months of research, development and too many late nights to mention, that simple idea turned into what became the UK’s largest phone recycling comparison website. On the 13th of January 2010, Compare and Recycle officially launched.

Since starting as a couple of web developers trying to bring an idea to life in a spare bedroom, Compare and Recycle has grown into a nationally recognised brand backed by a passionate and talented team. We have helped over a million customers get in excess of a hundred million pounds for their old phones.

Over the last decade, the mobile phone industry has changed dramatically. Compare and Recycle has had to respond to industry changes by continually improving and expanding our service. We've implemented many of the biggest innovations in the phone recycling industry, and we’ve even grown beyond the core recycling comparison- offering tools for getting the best deals on buying refurbished phones and mobile phone contracts. 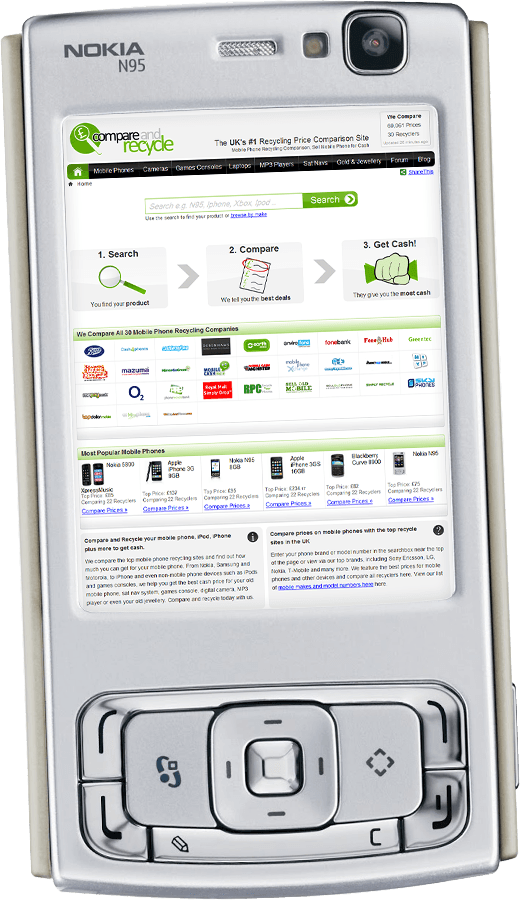 Compare and Recycle way back in 2010!

Our core service is providing a comprehensive and trustworthy list of different recycling companies so that you can make an informed decision about where to recycle your phone. We’re the largest independent comparison site in the UK, and we’re proud to offer you a first-rate service. We’ve helped over a million customers to get the best deal for their smartphones.

If getting a refurbished device isn’t for you, then we have a variety of phone contracts on offer from a multitude of different retailers for you to choose from instead. We provide a mobile phone contract comparison so that you can see what the best deals are on the market for your smartphone of choice. We offer everything from Apple and Samsung to Huawei and Sony, so you can find exactly what you’re looking for.

Just some of the publications we've been featured in...