Samsung Galaxy Fold: What Do We Know So Far?

Teased last November to a developer conference, the Samsung Galaxy Fold is touted as Samsung’s first foray into foldable screen handset technology. Thankfully, the teasing continued thanks to Samsung Vietnam who published a video of the forthcoming Samsung Galaxy Fold by mistake.

There are some notable differences from that conference event and the Samsung video – one that suggests the new handset could be unveiled in a few days at Samsung's Unpacked event in San Francisco. "The future will unfold" is a strong hint and sounds pretty definitive to us.

Folding tech has a long pedigree in a way. The idea of folding technology has been pushed by industry leaders like Microsoft, Samsung and Google. However, 2019 might just be the year of foldable tech.

This year has already seen the launch of the FlexiPai by Royole at CES 2019, with whispers that LG and Microsoft are set to launch a new handset along with Samsung and Huawei in 2019. This is the new ‘holy grail’ of the tech sector – and one that companies are pumping vast resources into.

What do we know so far?

The Samsung Galaxy Fold is Samsung’s tentative first steps into a game-changing technology – foldable screens. The handset which opens in a clamshell-style design that folds out to a full-size tablet display could change the way mobile phone content and apps are consumed by mobile smartphone users. 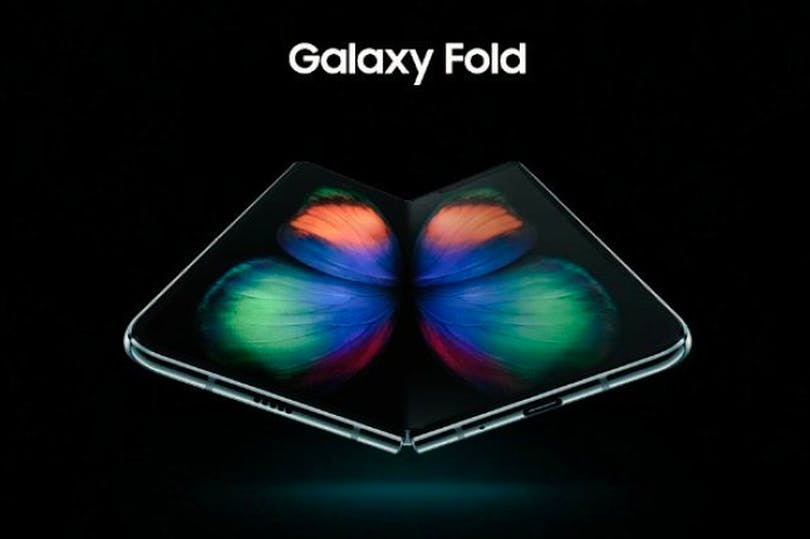 The technology is called Infinity Flex Display and Samsung had to literally create new materials and processes in order to create this ground-breaking technology. Its functionality is based on years and years of research and development by Samsung. No wonder it took them 5 years.

When will we know more?

Samsung are big fans of Mobile World Congress and have returned annually to the Barcelona mobile tech convention centre to pitch their latest innovations to the world. This year is a bit different, Samsung decided to draw the entire world's attention to themselves and organised a solo Unpacked event happening this Wednesday in San Francisco.

The company is set to announce the Samsung Galaxy Fold and Samsung Galaxy S10 Plus along with a range of budget/mid-range handsets that will likely lead to the unveiling of this important handset.

There is no real news regarding release dates – with TechRadar suggesting the company will go beyond the April 2019 timeframe for release. The new Galaxy devices might be displayed at the MWC2019 event in Barcelona, so if we spot them there we'll make sure you will see them first.

Furthermore, the Galaxy Fold one of the most expensive handsets of 2019 – the level of technological innovation and the Samsung badge combined will help drive up the handset price tag of $1850. The foldable phone was showcased to investors at CES 2019 behind the closed doors and The Investor reported that release units will be limited to 1 million.

What are the rumours?

The latest Vietnam video gaffe does point towards a changing stylistic reality in that the bezel will be thinner and more dynamic than first thought (based on the original handset). However, a note of caution, this could be a prototype handset – a concept-based device.

Other rumours surrounding the device articulate a problem regarding the ubiquitous fragmentation problem that has forever cursed the Android ecosystem. The folding screen tech teased by Samsung, powered by innovative design and development, with a new Sense UI interface from Samsung, will nonetheless be powered by Android. Therein lies the problem. The myriad of Android variant-approved apps could render the handset useless?

Any issues or problems with Samsung’s new handset technology?

Such proprietary tech and a fragmented ecosystem could render top apps unworkable on the new Samsung foldable smartphones.

However, battery life might not be a major issue for this mega handset. According to rumours, the device could have two 3,100 mAh battery providing users with major capacity for multimedia playback and much, much more.

Other rumours surround the storage details. Tech Radar argues the Galaxy Fold could come preloaded with 512GB of RAM with 512GB to 1 Tb of storage space. The handset could therefore hold a lot of processing, storage and battery power all of which means users can really get a lot out of the handset.

There have been other rumours around the problematic nature of the technology. Recent rumours surround the inability Samsung had in managing to create a purposeful ‘encapsulation’ system that protected the screen from damage from the elements.

All these rumours could prove to be little more than nonsense. However, Unpacked will showcase Samsung’s first official foldable handset and we could be watching history as the mobile phone sector experiences a rapid change on par with 6.0” screen sizes and chipset processing technologies.

All you need to know is that Compare and Recycle will keep you up to date with any and all announcements from Samsung regarding the Galaxy Fold.