iPhone 11 Line-Up: Is It Worth the Upgrade? 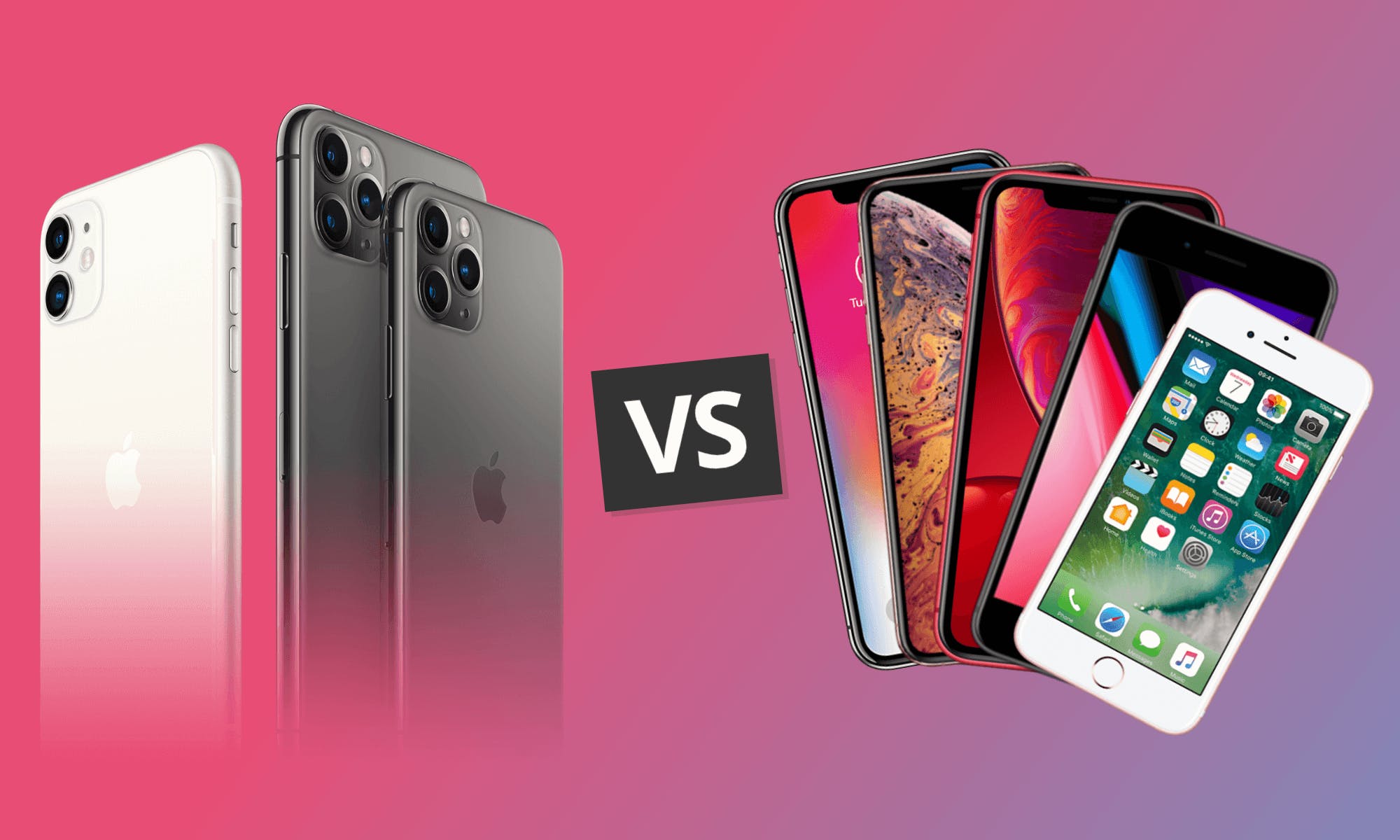 Apple hosted its 'special' event at the Steve Jobs Theatre in Cupertino, where the company introduced three new iPhone devices. These phones are successors to last year's flagship iPhones, and the next-generation of its more affordable offering, the iPhone XR. Apple release new devices on a yearly basis at around the same time and many of you may have your contracts coming to an end in-line with this cycle.

Read on as we break down what's new in the iPhone 11 line-up and how it stacks up against three of the past generations of iPhones.

Back in 2016, iPhone 7 shook up the industry and set the new standard. The iPhone 7 was the first line-up to take the new route of headphone jack-less design and non-clickable, pressure-sensitive home button. The Plus model also featured a first-ever dual camera setup which many people were impressed by. Fast forward to 2019, and the iPhone 7 devices have only just been discontinued on the Apple store, which demonstrates their popularity.

Looking at the iPhone 7 compared to the iPhone 11, the difference of the exterior is colossal, which once again illustrates that 3 years is a long time for the tech industry. On the spec side, the leap is even more noticeable. 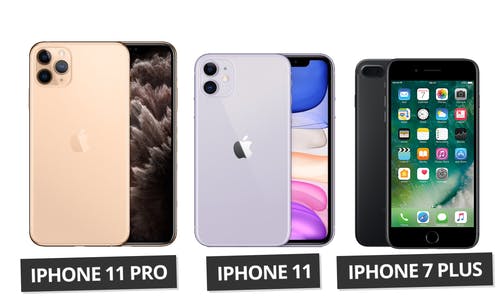 Both the design and specifications of the new iPhones compared to what the iPhone 7 models featured will probably trigger a can't-wait-to-upgrade desire for iPhone 7 users for the first time in several years. The iPhone 7 models may start to look outdated compared to the bezel-free iPhone 11 and Android counterparts, and no doubt the iPhone 11 Pro OLED display wins over a 3-year old LCD panel by quite some margin. In 2019, the A10 chipset isn't comparable. The new generation A13 Bionic chipset will bring the fastest GPU and CPU and will be 40% more power-efficient, providing extra hours of battery life. 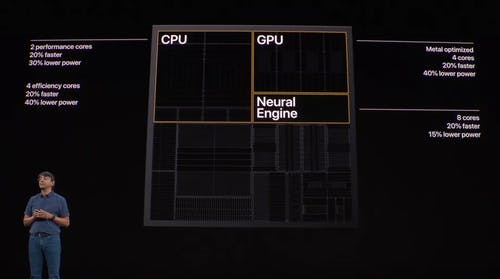 Take a look at the table below and pay extra attention to the new cameras on the iPhone 11 and iPhone 11 Pro models- this release is all about the camera upgrade.

As it is able to run the same iOS version as iPhone 11 handsets, the iPhone 7 is still a great phone and what's more, it's a comfortable device to hold (in the era of phablet phones we can't stress this enough). The A10 chipset inside doesn't make it any weaker 3 years down the line, however, the iPhone 11 series will have several advantages such as an improved battery life and a more sophisticated camera, better quality display and a few bells and whistles like next-gen authentication method, wireless charging and 50% charge in 30 minutes. Whether the package that comes with the iPhone 11 devices justifies the cost is up to you to decide, but if you do go for a brand-new iPhone, you can currently trade your iPhone 7 in for up to £170 or the iPhone 7 Plus for up to £240. This is a decent save on the upgrade.

The iPhone 8 and 8 Plus are the last devices in Apple's portfolio to offer a classic iPhone look with a home button and large top and bottom bezels. Compared to iPhone 8 devices, the iPhone 11 line-up looks miles ahead from a design perspective. However, Apple didn't change the design of the iPhone 11 much compared to the iPhone X which paved the way for a bezel-less look back in 2017. 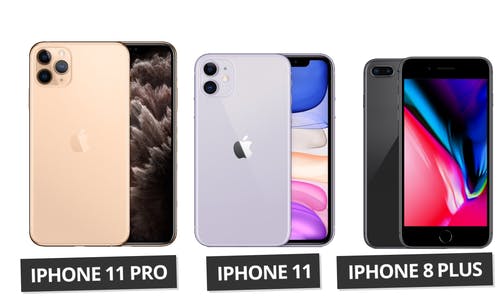 The winner is certainly the iPhone 11 line-up. The display isn't as good as those on the iPhone 11 Pro devices, however if you're a fan of Touch ID, this is a factor that could convince you that the iPhone 8 is best. Ultimately, the A11 chipset pales compared to what A13 is capable of based on claims Apple made during its 'special' event. The camera system on the iPhone 11 and iPhone 8 models matches the specs, but the iPhone 11 Pro's flagship triple camera setup can't be beaten by a dual-lens setup on the iPhone 8 Plus. The 2019 iPhones have a significantly superior battery life and paired with perfectly engineered A13 chipset, the specs look better than on the iPhone 8 smartphones. 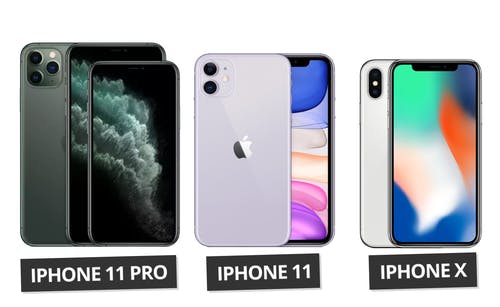 If we were to do a blindfold test to find out which device is the iPhone X and which is the iPhone Pro, the only way to tell would be the back design and new rear camera layout. The iPhone 11 line is better spec wise, but not earth-shattering enough to say your farewells to the iPhone X. Let's take a look:

The display size on both the iPhone 11 Pro and iPhone X is identical and both feature high-end OLED panels, but you may find the HDR content on the iPhone 11 Pro device more vibrant. There isn't really a task that the iPhone X wouldn't be able to run, but with the latest A13 chipset under the hood, the iPhone 11 flagships are going to be slightly faster at multitasking and will be able to use the battery charge more efficiently. Camera performance is the key area that the iPhone Pro models will be able to do better in than the iPhone X, thanks to the third lens added to the rear camera array of the Pro models. The new ultra-wide 12MP lens will make shots wider and with more advanced sensors, contributing to a better photo quality in low-light conditions. If Apple released Night Mode in the upcoming iOS update, then the iPhone X would stand up to what iPhone 11 devices have to offer. To summarise, we think you don't need to rush to the Apple or carrier store just yet. 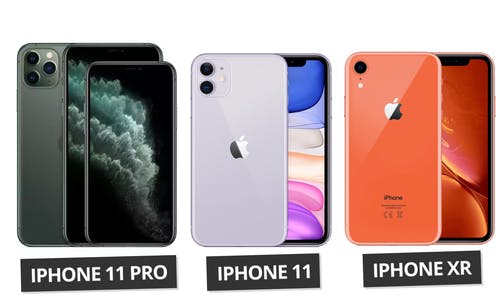 It is not official and Apple did not confirm this on stage, but most people accept that the iPhone 11 is the successor to the iPhone XR. Tim Cook disclosed from the stage at the Steve Jobs theatre that the iPhone XR released last autumn was Apple's most popular iPhone and this is absolutely deserved. The iPhone XR is a great device, sharing many similarities with its siblings the X and XS Max for less, but did Apple innovate enough with the iPhone 11 to convince those who purchased the XR last year to upgrade?

Unless you're the type of user who upgrades every year and just can't live without the latest iteration of the iPhone in their pocket, there's little that the iPhone 11 can offer on top of what the iPhone XR is already capable of. It has the same display tech, RAM and storage options and super smart processors powering both devices. The only difference is the front and rear camera sensors, as the iPhone 11 now has a dual rear camera and has a slightly improved front camera. It is surely the biggest upgrade over the iPhone XR. During the keynote, Apple mentioned that the iPhone 11 will have one hour longer battery life than the XR, but we're sure that the battery life optimisation feature coming with iOS 13 will boost the iPhone XR's battery performance. So, keeping your iPhone XR for a little longer would be the ideal move to save money, enjoy your current phone and gear up for something truly groundbreaking from Apple next year. 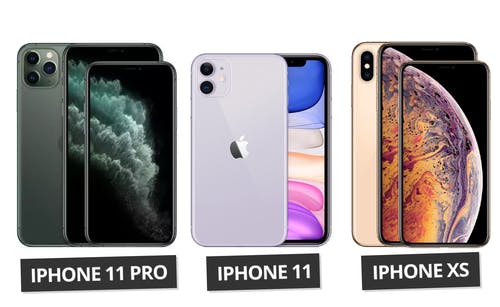 Compared to their 2018 counterparts, the Pro line features a 12MP lens on the front and an additional third telephoto lens on the back, an incremental boost to battery capacity and faster battery charging (on paper). For more details of the spec comparison, take a look at the table below.

Camera changes is the only real visual difference between the last year's iPhones and the new Pro lineup. The additional ultra-wide lens will seriously level up night time photography. The new Pro models have more changes happening inside: speed, bigger batteries and more storage that will aid new iPhones' machine learning capabilities and computational photography feature that Apple have named Deep Fusion. If these upgrades are convincing enough for you, then you will be able to get yourself a new iPhone beginning from September 20th. However, if you're not that fussed, there's nothing to go for if you own an iPhone XS model.