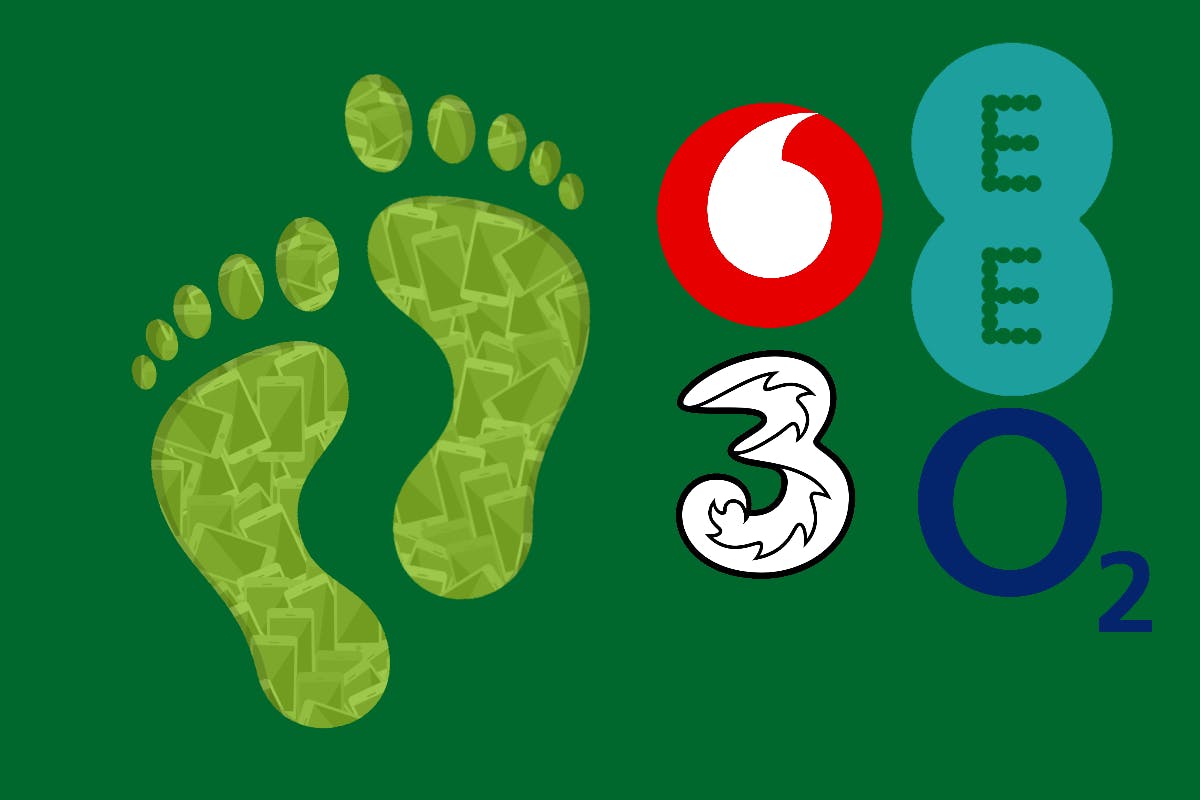 We have set out some best practices and recommendations for mobile phone ownership to reduce the environmental impact and wanted to see what the networks are already doing, reviewing their environmental efforts such as their carbon footprint and what steps they are taking to move toward a more sustainable business.

We can of course look at how the networks are running their stores or how the infrastructure affects their carbon footprint. Many of these large companies have committed to reduce carbon emissions of their own impact in operations and supply in accordance with the Paris Agreement.

But we want more from the networks, to take real ownership in reducing the environmental impact of their customers.

Around 65% mobile phones are sold on a contract basis in the UK and there are 84.5 million active mobile phone subscriptions in the UK. With the following Networks and Virtual Network Operators, how might you go about choosing a greener option of phone contract?

We have ranked the “Big Four” network operators based on the options they provide on buying new contracts. 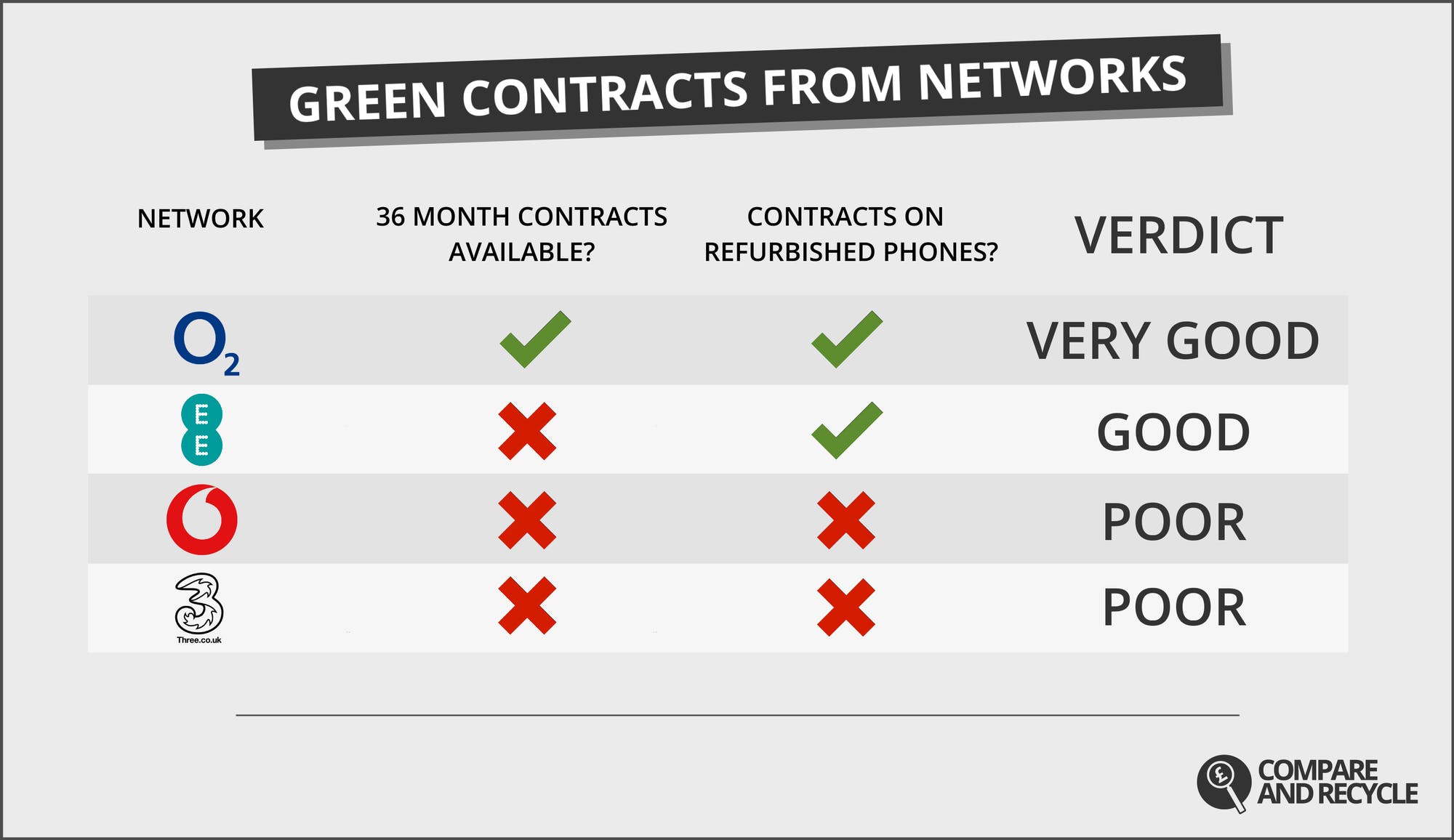 Our environmental choice offers 36 month contracts on all phones, refurbished and brand new. They have a clear “Blueprint” for providing a sustainable service, however the whole sustainability section of the O2 site looks to be somewhat out-of-date with broken links and references.

The prices are still not absolutely competitive and the difference in price between a 24 and 36 month contract may not be enough to convince the consumer to take a “greener contract” but it is great to see this as an option for the second most popular network in the UK.

EE are owned by BT, and combined they are the most popular network in the UK. They claim to be devoted to reducing their own carbon emission by 87% by 2030, (is that quick enough) but promise a 80% reduction of internal carbon emissions by 2020.

Again, we encourage companies to think about their internal infrastructure, but kerbing supply and slowing down the rate of which people upgrade to a brand-new phone would go some way to cutting down the emissions a year caused by mobile phones.

In our recommendations, we suggest offering 36 month contracts as a way to spread the emissions of production over a longer period, and unfortunately EE do not offer 36 month contracts, however, they do offer “good as new phones”. But details on whether these are traditionally refurbished or phones sent back in the 14 day cool off under the Consumer Contracts Regulations and Consumer Credit Act are unavailable.

They claim to be supporting a low carbon economy by providing better communications technology and solutions that have an ongoing effect to reduce other businesses emissions. Claiming to have saved an estimated 3.5 million tonnes of CO2-e with these solutions.

However, on the consumer side, they don’t appear to have made the same commitment. Only offering 12 and 24 month contracts on brand new mobile phones and not offering any greener options such as refurbished mobile phones.

Three have made steps into reducing the output of the infrastructure by being the first organisation to share the infrastructure with another network alongside EE. Similar to the statement made by EE they focus on “managing their own footprint, and supporting customers to live more sustainably”.

However on the consumer side, Three severely lack in an environmental commitment by not offering a greener model of contracts, the 36 month contracts or buying a contract with a refurbished device. Leaving them firmly at the bottom of our review of the top networks.

In addition to the four main operators, there are virtual network operators that piggyback off the infrastructure of the big networks. These generally price competitively, let’s assess their environmentally friendly contracts on offer. 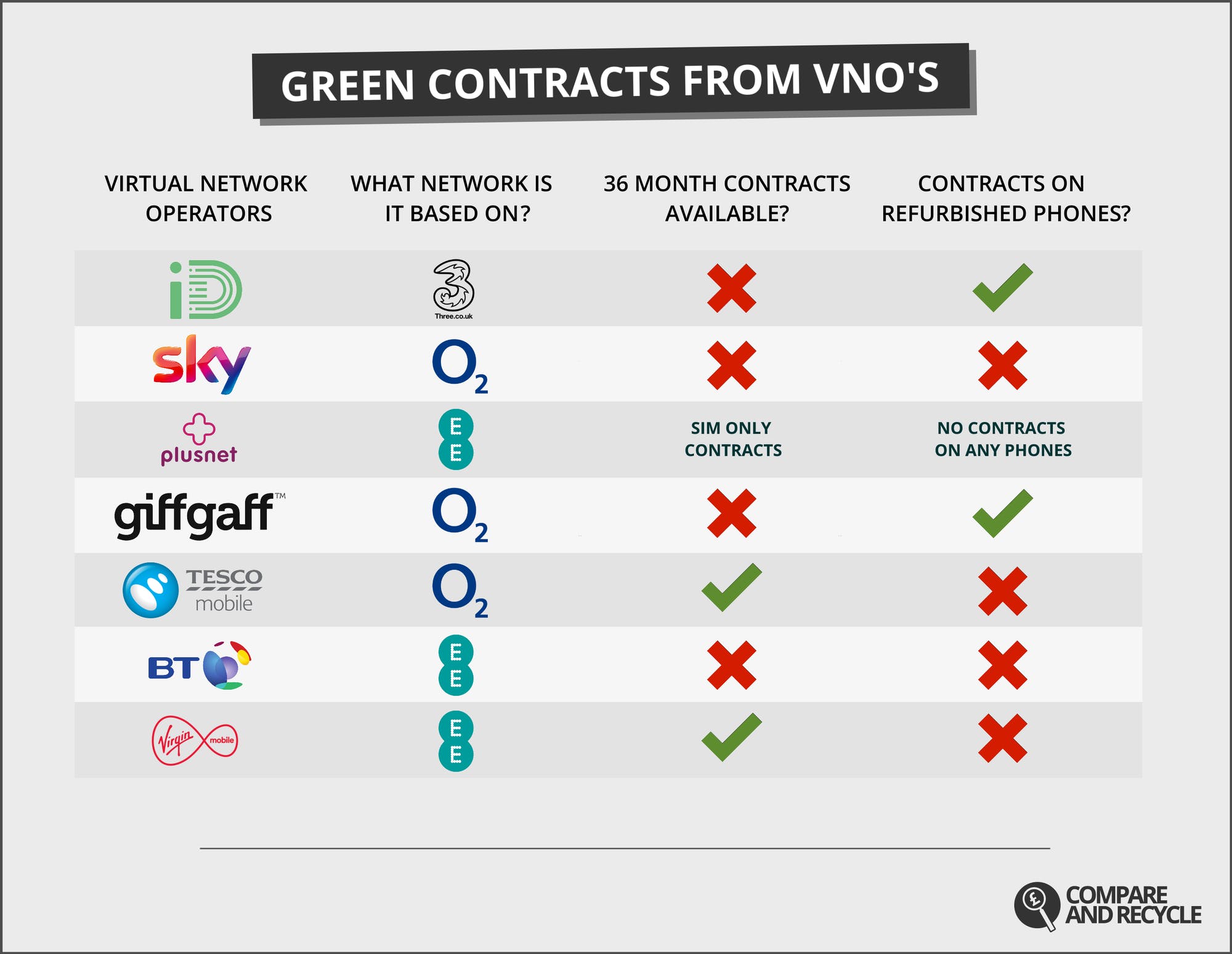 We can see that a few of the VNO's are offering either 36 month contracts OR contracts or refurbished phones, with only Sky and BT (two of the largest corporations on the list) not offering either.

PlusNet are a special case as a VNO that do not sell handsets at all.

Why are 36 Month Contracts important?

As we discussed in the smartphone impact report, around 80% of the total lifetime greenhouse gas emissions from a mobile phone are created in the mining and production.

So when buying a new phone, the longer someone can commit to keeping that phone, the lower the overall greenhouse gas emissions will be per year!

VNO's are inclined to only offer the contracts similar to their parent network operator, that leaves only the ones under O2 to be able to offer 36 month contracts, but when we look at the table, only Tesco Mobile provide this as an option alongside Virginon the EE network.

Manufacturers are not inclined to encourage three-year contracts because they want their customers to be locked into a loop of buying a brand-new phone every couple of years. But as we saw, this creates further strain on the supply of the raw materials of rare metals.