SIRI: The Rise of the Intelligent Personal Assistant

How will Apple’s newest version of the iPhone endeavour to present SIRI?

SIRI has become a ubiquitous dynamic within the ever-changing personal assistant field of technological development. Those unaware, Siri has a long history. For the uninitiated, Siri is a smart personal assistant and “knowledge navigator” which is embedded into Apple’s mobile iOS platform. Siri’s genesis goes back to 2003 when DARPA%20Global%20Nav%20-%20About%20Us%20-%20What%20DARPA%20Does%20-%20DARPA%202015%20(Approved).pdf), the US military research agency, invested in a project called Siri International. The government funding ended in early 2008 and it was at this point SI went forth and raised capital in the private sector. By early 2010, Apple Inc. had acquired SI for nearly $200 million. Apple then launched SIRI in late 2010 as a digital app and by 2011 it was embedded into iOS. The military-informed birth, the rapid growth and expansion along with the early acquisition all heavily influenced Apple’s focus on why the personal assistant software market was important and would become a critical tool in Apple’s future product armoury. 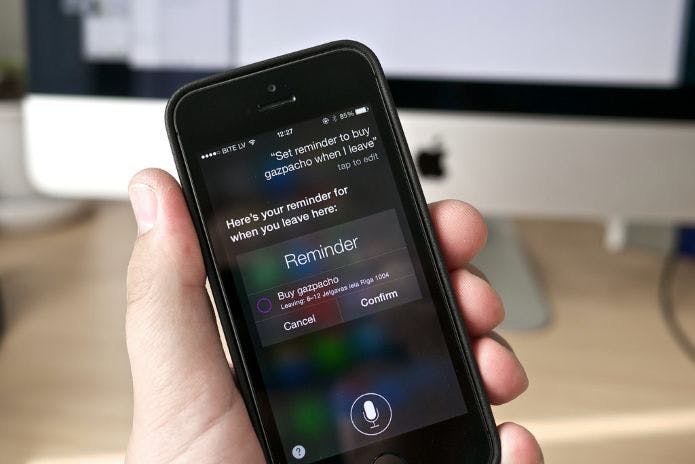 But why is SIRI popular?

“Siri works well today because Apple got Siri to do a smallish number of very meaningful tasks really competently” – Phantnani, Patra and Sharma

There is a simple answer to this question as Siri has gone from sector joke to industry leader in terms of virtual assistant technology in less than five years. According to the Wall Street Journal, Siri is so crucial to the Apple iPhone business model that it was a central focus during the Apple Developers Conference in July 2016. Why? The answer is pretty simple; the digital assistant technology, “heralded a future of people finding information or completing tasks on their device by speaking rather than typing or tapping. That vision of Siri hasn’t fully materialised, leaving the door open for other technology companies to push into Apple’s turf”. Apple doesn’t do failure well. This is why they are re-focusing attention and efforts on Siri for the upcoming release of iPhone 7 and iOS 10.

What can we expect?

It is safe to suggest that with such efforts being focussed on Siri we can expect an epochal shift in terms of Siri’s approach, functionality and usability in the context of digital assistant developments. How will this change present itself? According to Salvatore Parise, Patricia Guinan and Ron Kafka, virtual digital assistants can help users by “solving the crisis of immediacy”. What do we mean by immediacy? We have become transfixed by digital immediacy – the act of Googling, Shazzaming or IMDBing when we need information fast. Siri needs to take this immediacy dynamic forward in relation to digital task completion. Another direction of change, as seen in a recently purchased company patent, is a more behind-the-scenes technology that runs pre-arranged plans in the background without disturbing the user experience. To put another way, reminders to friends could be texted whilst the user is on the phone booking a table for an event. Simplicity through appreciation of calendar, inbox and search engine history collaboration.

In order to achieve the above specificity, Apple is rumoured to be planning a roll-out of Siri across the Apple collection. The long-term strategy, according to Gizmodo, is to have Siri run across platform from iPhone to iMac via Apple Watch, TV and MacBook. One digital personal assistant, centred upon the iPhone but cross-tabulated across the digital landscape in order to better manage the user’s life experiences and outcomes. Gizmodo believe such cross-tabulated Siri exchanges could see films being downloaded, websites bookmarked, ticked purchased based on reminders or invitations. Further integration includes a new ‘Siri’ remote for Apple TV, according to Mac World, and will also come with iMac systems too. Yet, like all Siri platforms, it needs to connect with your iPhone. The iPhone is still considered the Siri touchstone in hardware and platform terms.

What else can we expect with the Apple iPhone 7 and SIRI collaboration? It’s cool but it is also very boring and technical. Apple has re-engineered the entire file system for iOS. This has been accomplished with Siri in mind. According to Forbes magazine, the purpose for this change is to empower Siri’s wider reach within the system in order to access more relevant user data and histories. Finally, there are more rumours that Siri will integrate with key programs from Calendar to Stocks via third party apps. This new integration is to show more ‘love’ for Siri in the third-party app environment. Getting more developers to utilise the technology will create more user ‘buy-in’.

When will we find out?

There is not long to go now and we cannot wait here at Compareandrecycle.co.uk for the iPhone 7 launch. September is the usual unveiling month for iOS and iPhone products. Cupertino is keeping quiet on the unveiling. The usually secretive Apple Inc. never divulges anything before launch day unless it has been leaked or stolen. So we will have to keep tuned in and wait until September when the new Apple iPhone 7 and iOS are released. Siri will be a big part of the iPhone 7 and the rumoured integration and collaboration between digital web experiences, search histories and calendar/stocks and personal data will make Siri a virtual assistant virtuoso with the ability to multitask human outcomes and experiences all from a ground-breaking smart phone. September cannot come sooner!