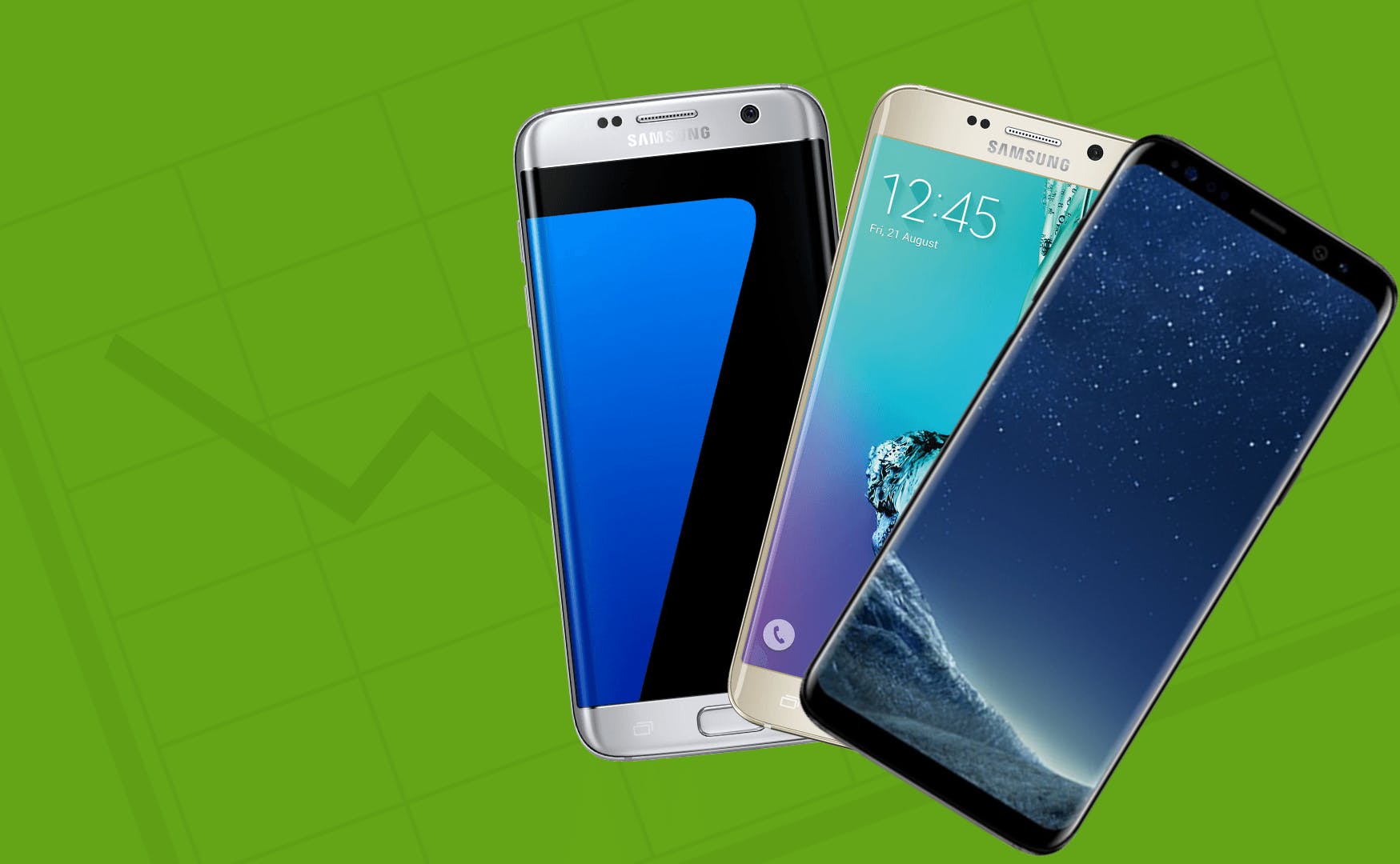 With the run up to the Note 9 lunch fully in motion, we look at the price trends for all previous Samsung phones to help you decide and prepare your wallet for the inevitable £1k cost of the newest handset.

We have some good news for Samsung owners!

In anticipation of the Galaxy Note 9 announcement on 9th of August, we analyse the average price of previous models for those of you looking to upgrade.

It’s the time of the year when Samsung is going to unveil their second flagship this year. The first sneak peaks and improved features were leaked and there's lots to get excited about the new Note release.

We know that most trade-ins follow a two-year cycle. This means most people considering buying the Note 9 will be trading in their older Samsung devices, we know that more of you are investigating the value of their Samsung phones.

So here we dive into our price tracking data to find out when is the time to trade-in your older Samsung and get paid the top price. We review the tracking data in chronological order from most recent handsets to the oldest.

If you haven’t got time here is the fastest summary;

There are some great prices for the older Samsung models, in particular the high capacity S6 models that can recoup you up to £147 a whopping 3 and a half years after the phone came out!

The data pulled from over 30 smartphone recycling providers tells us that for the past month the recycling price has increased by £30. While it may have reached it's peak now, after the Note 9 release the price will drop significantly. Post Note 9 release prices will help push handset prices down due to the volume-based pressure of so many people upgrading and recycling older handsets. So get on our Galaxy S8 comparison page and lock in your price now. 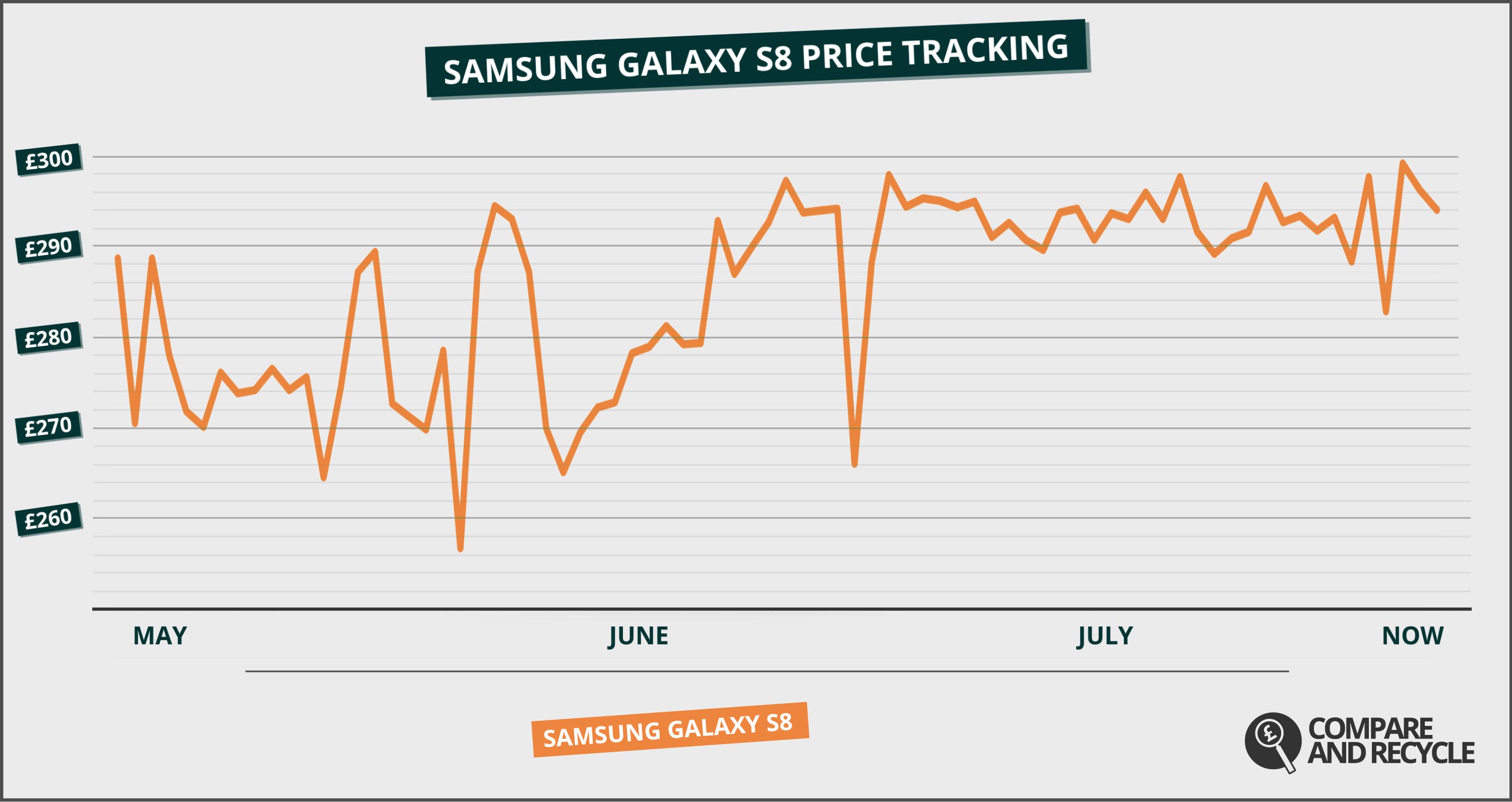 If you own a bigger Galaxy S8, you get to compare higher deals. We noticed the same pattern with Galaxy S8 Plus recycling prices. The prices have shot up since the beginning of June and you could get yourself an extra £30 from selling your old S8 Plus now. Scoop this hot deal before it melts. 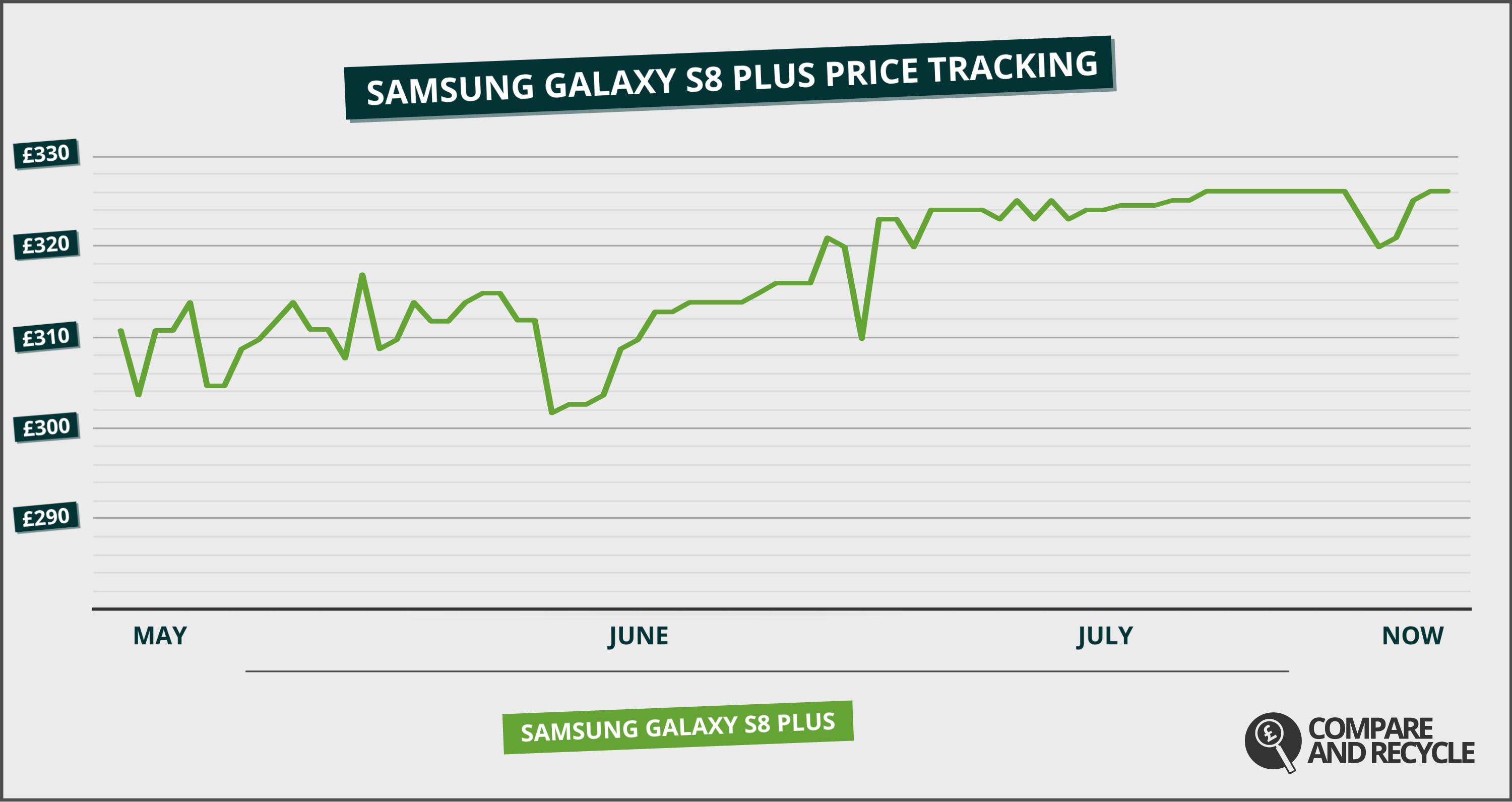 Unlike the two Galaxy models above, S7 Edge prices are going down a bit. This might be attributed to the fact they are approaching their 3rd anniversary. Since the price peaked in June last time, recyclers offer £20 less and current average trade-in price is just above £160.

The S7 has dropped in price due to it being in the 2 year cycle from the S9’s so as everyone upgraded to the s9 it’s in all likelihood that they traded in the s7 to do so and now the Merchants probably have enough of them to not warrant increasing the trade-value to increase supply. Get the price now or regret it later. 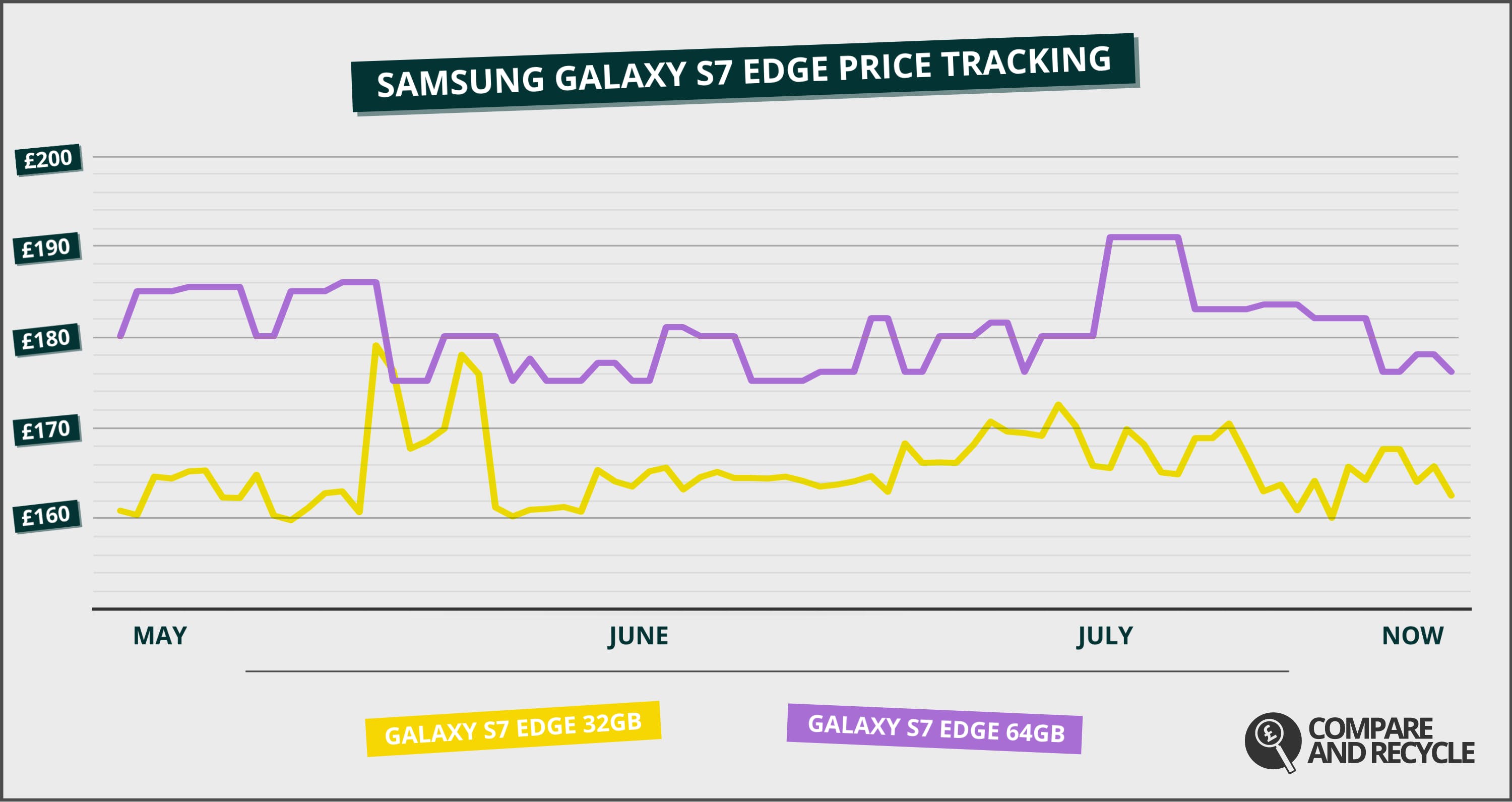 Good news if you own a Galaxy S7. Trading in your Galaxy could save you over £100. The 64GB models might go up to £170 in value if recyclers will increase their offers prior to the Note 9 announcement, which is quite likely to happen. Currently the 32GB can be sold for over £140. Your call! 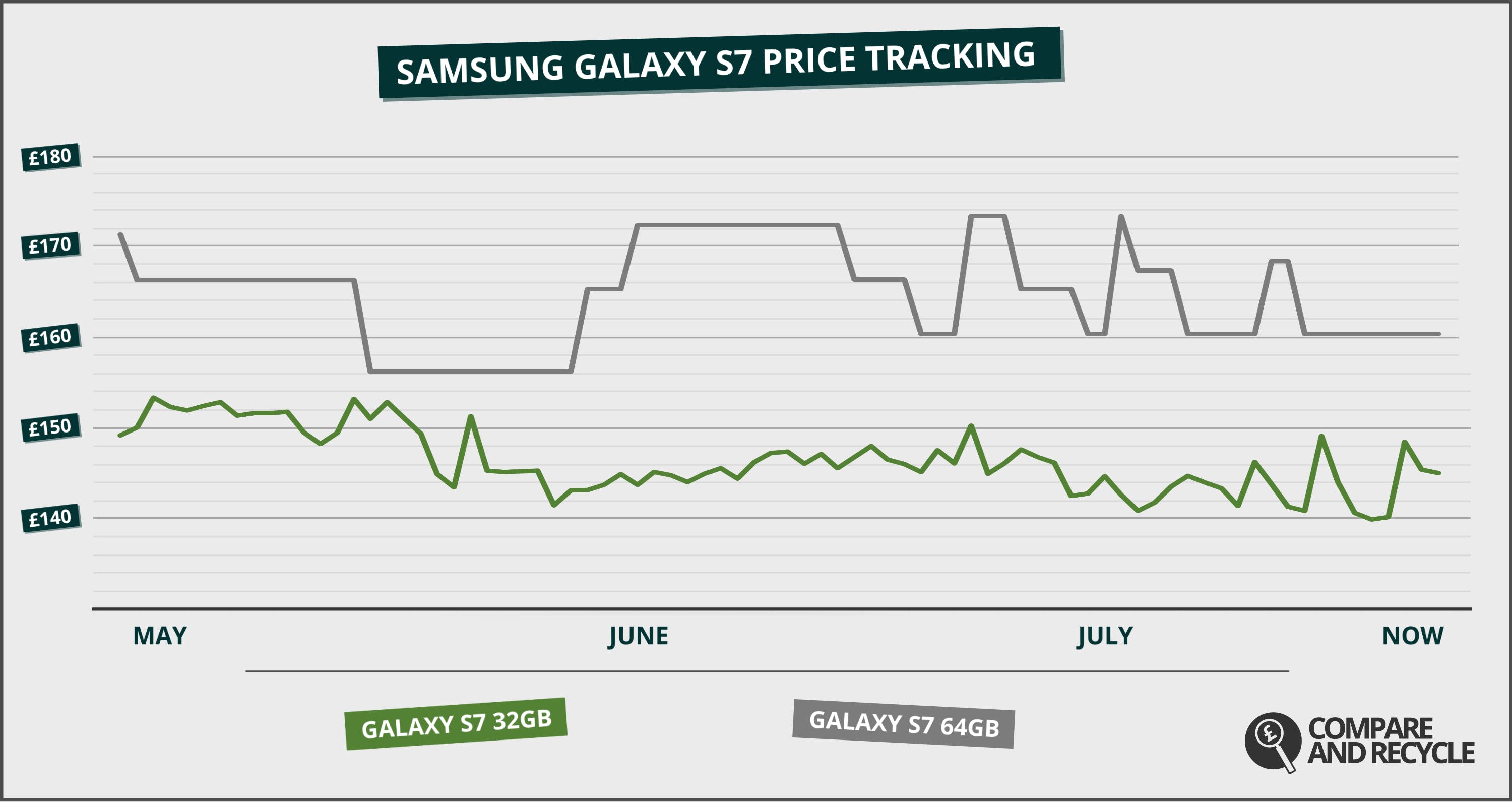 In the beginning of May you could have got slightly more for the 32GB Galaxy S6 Edge model. That's quite unusual, but the reason behind is that 32GB is more popular among Android users. Now the 32 GB model is just a few quid below the 64 GB price which is a good shoot up for a 3 years old phone.

The 64 GB model might reach its peak at £130 once again as we see a steady increase throughout July. So if you own an S6 Edge and are looking to upgrade, now is the best time to trade it in. 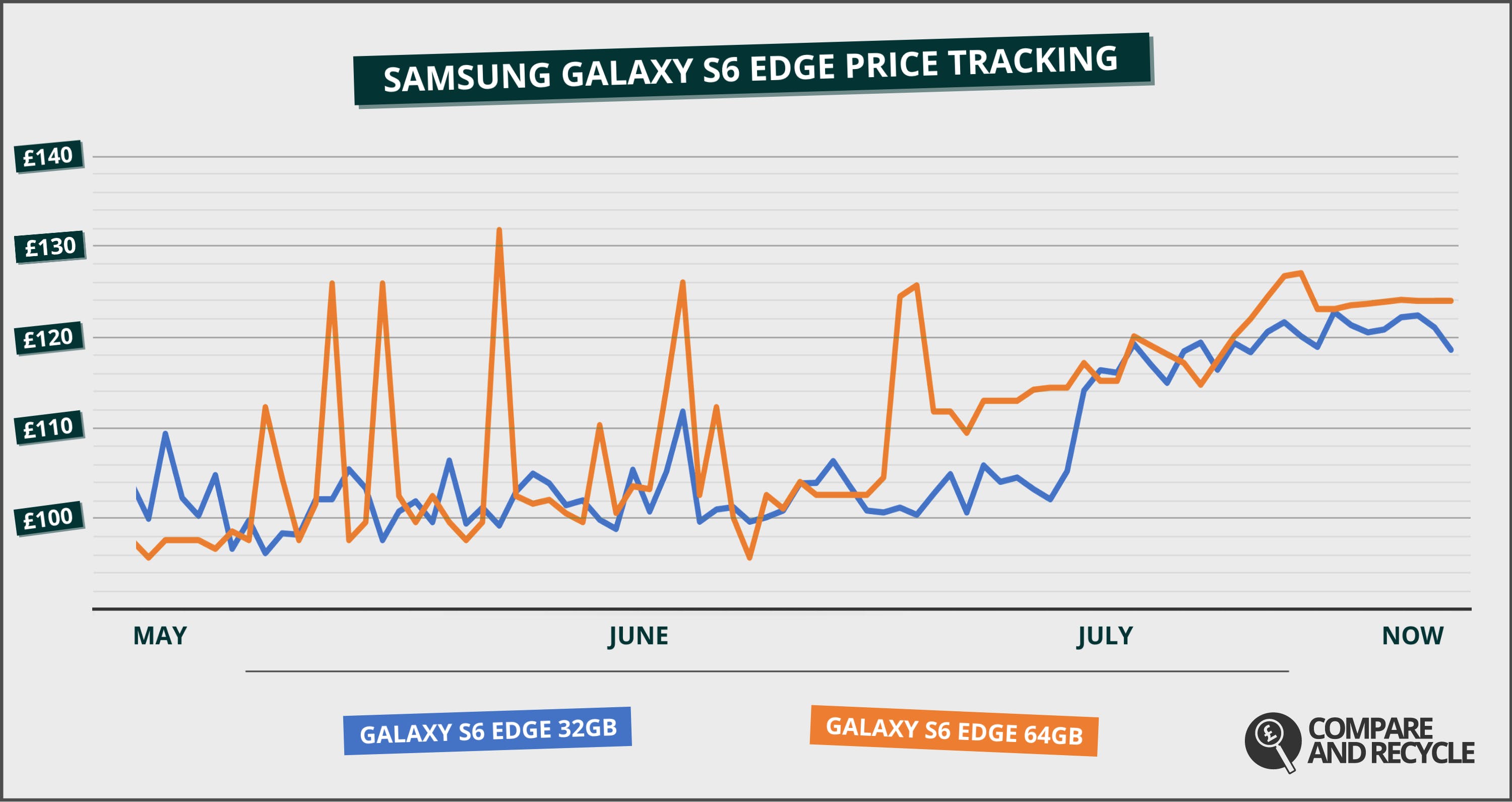 This device laid groundwork for Samsung's future Galaxy smartphones and directed them towards curved edges and infinity display. The higher models are in demand from our recyclers and they are wiling to pay a premium to be the ones to get those off you! The 128GB S6 is as rare as hen's teeth so if you have one, now might be the time to let go! 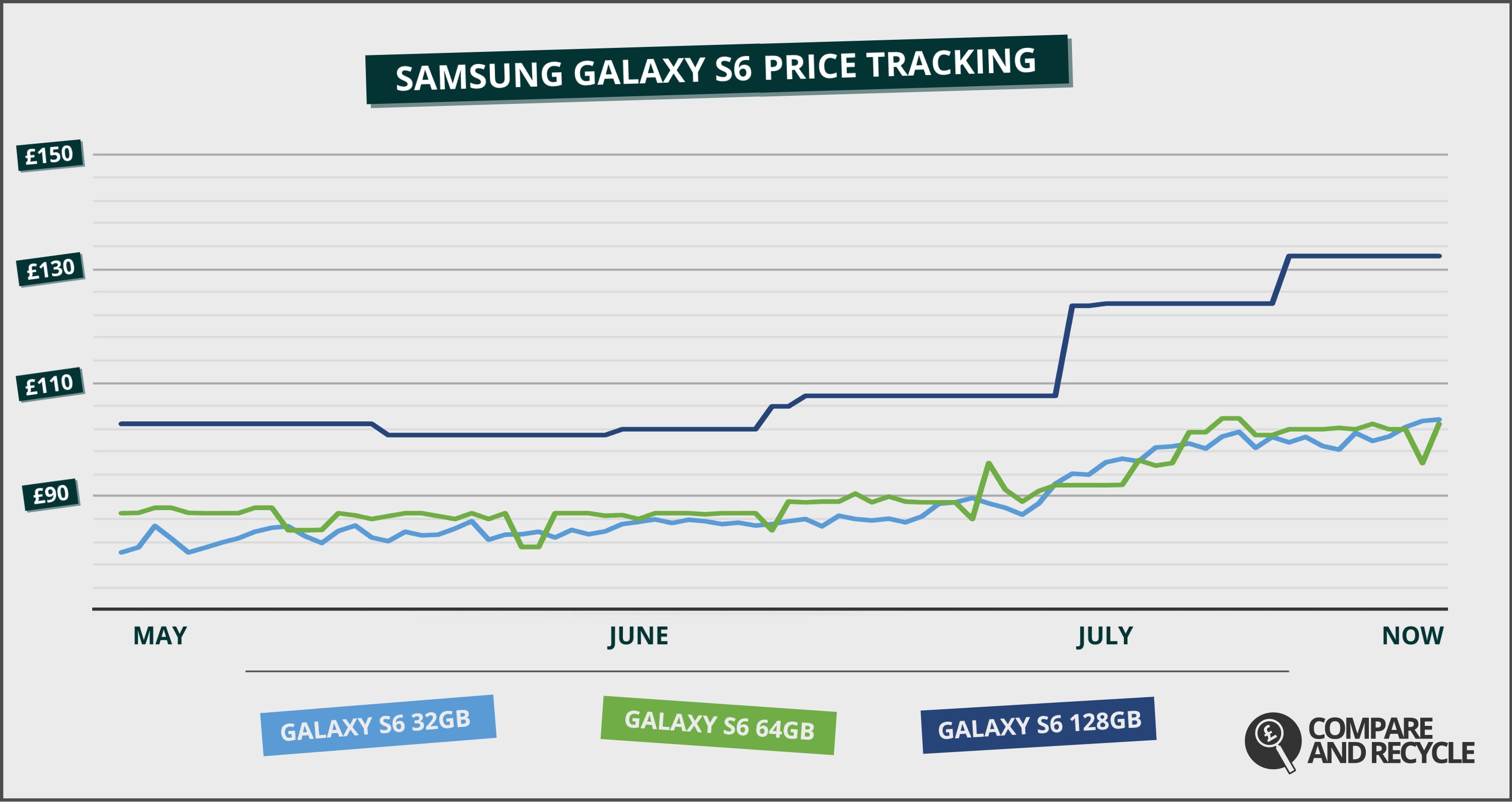 The successor to the Note 9 retained its value fairly well over the past months. The recycling price keeps floating around £400 with slight fluctuations for the past couple weeks. There are less than 3 weeks left until Note 9 unveiling, so recyclers might top the prices just above £400 prior to the release, but we expect them to move downwards the second preorders are live. 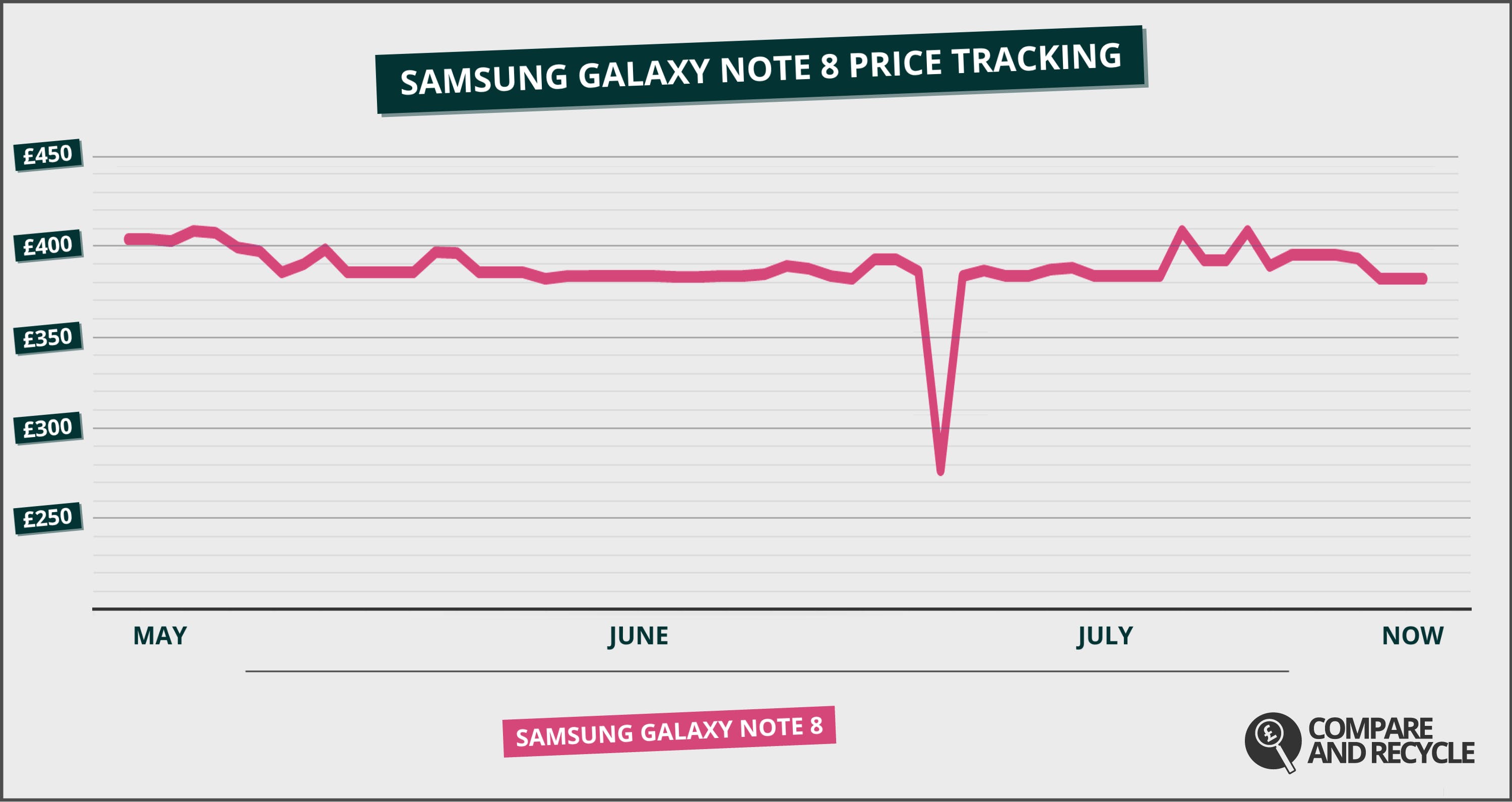 The graphs highlight one key point - prices are going up but it won't last for long as the Note 9 is set to go official on August the 9th. Speaking of year on year experience, after the announcement recycling vendors will see a spike in handset recycling demand for earlier models. This will create the volume-based trend and allow recyclers push handset prices down due to so many people upgrading and recycling older handsets.

Keeping an eye on prices is a good tactic for now if you feel like taking a risk. Our tip is to be cash-savvy and lock in a decent price for your old device. If you spot a higher price a day or two later, replace an order and sent your device off.

On the plus side, the release of the Note 9 should cause refurbished Samsung Galaxy Note 8 price reduction. In both cases you can't go wrong either with buying a more pocket friendly option or part-funding your next upgrade by recycling your old phone. Go Compare and Recycle now!