Microsoft unveiled an ample array of exciting new devices at their New York event. The sheer volume of new devices plus the state-of-the-art tech that Microsoft exhibited has made this event one of the most impressive launches we have seen in a while.

During the launch of the remarkable Surface Pro X was the launch of another product that caught our attention: a new handheld folding device which can take calls and runs, at least in part, with Android apps and a form factor that matches the “experience you’d come to expect from a Surface device”. So, what is the Surface device experience exactly?

The Surface Duo was the larger folding tablet device that we couldn’t envision fitting into our pockets easily. However, the Surface Neo (one of the devices that was announced) could be a much more effective model for daily use. The hinge on the Surface devices are some of the best in the industry, as we know that many from the first release are still holding strong. Rather than moving towards the continuous folding screens which are likely to be inundated with their own problems to begin with, Microsoft are looking at perfecting the double screen setup.

Doubling Down on Dual Screen

The Surface Duo has two 5.6-inch screens that are attached to each other by the hinge and open outwards like a book and can be folded all the way round. While Microsoft were evasive about using the terms ‘phone’ or ‘tablet’, the introduction video showed a versatility that could compare easily to the top range of smartphones available on the market today.

In practical terms, we can see the application of a dual screen phone being more beneficial to productivity than one single large bendable screen. If you work in an office nowadays, you are much more likely to work on multiple screens than one large screen. Microsoft banking on people’s reliance to this technology could be a great insight into the market and consumer needs.

What Do We Know About the Surface Duo and Neo?

In short, not much. It’s coming out in winter 2020, which is over a year away. However, these devices were first hinted at via a cancelled project almost a decade ago, so these devices have been in the works for some time. This implies (hopefully) that Microsoft are striving for the best rather than merely filling a gap in their device list.

One of the potential drawbacks of this timing is that it runs the risk of being dated before it has even been released, with many similar companies about to offer folding phone solutions this year and next year before the Surface devices get released. We know that it folds both ways, comes with a lot of the features that make the Microsoft ecosphere an appealing option, has a 365 platform and it can integrate with your home or work PC. It can start and continue documents from one device to the other, and much more.

The Surface Laptop and the 2 for 1 tablet/laptop device is going to run a new version of Windows called Windows 10X. Microsoft has previously made custom Windows versions for mobile devices, and none have been greatly received or enjoyed by users. This has caused them to scrap the Windows mobile completely almost 10 years ago. In an anticipated move to using Android, Panos Panay promised Microsoft users that this device will “bring together the absolute best of Microsoft with the absolute best of Google into one product”. A bold statement and one that holds as much promise as it raises expectation.

We know that the device is going to come with Android and have the full catalogue of Google Play apps. This makes it superior already to the Huawei Mate X, and depending on how the release of the Samsung Galaxy Fold goes, the safe option of a double screen folding device could prove fruitful if people begin to lose faith in the early generation of folding screens and can’t look past the easily damaged screens.

What Do We Care About?

We are big supporters of sustainable tech, so with more moving parts, there is always going to be more that can go wrong. If the device is in the fully open position, are there more chances of getting the secondary screen scratched? Can it survive comfortably in your pocket? How easy are the screens to replace and will they be expensive? These are all important questions that ought to be asked of all devices moving forward.

We don’t really have a fully formed take on this yet, as it is far too early to tell. Even Panay didn’t show us the screens very much other than a brief open/shut of the device and a glossy pre-rendered video (see above). It’s going to be the battle of the foldable screens, and whether the multi-screen or foldable screen form factor wins out in the end will be determined by those that use them every day. However, we are impressed by what we have seen so far.

What Else Was Showcased? 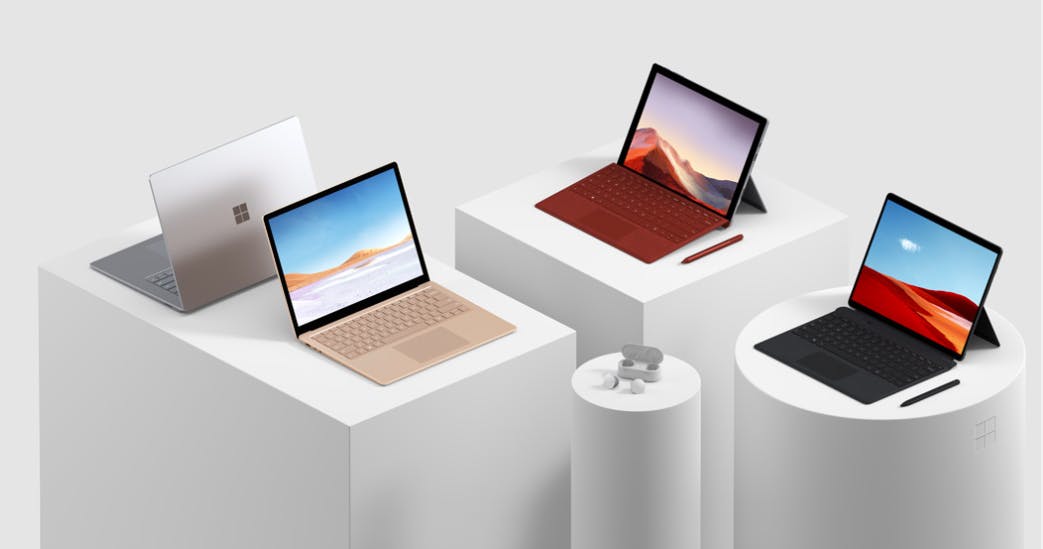 The Surface Pro and the Surface X were also announced. These haven’t gone through too rigorous of a redesign and have instead had a stats rebuff and brought them in line with today’s standards. The Surface Laptop on the other hand is an impressive looking device and by all accounts, looking and seeming like a laptop. The 13.5-inch laptop uses Intel Core chips, whereas the larger 15-inch model uses AMD Ryzen. The reasoning for this is that there are many different use cases for a laptop, whether for small form browsing, or for day to day working.

It wouldn’t be a Microsoft presentation without throwing some shade at Apple, and it was music to our ears when we heard Panay say “being able to repair and service a product without impacting the beauty and elegance is critical. Serviceability, repairability, we did things so we can replace the screen or the keyboard without affecting the beauty”.

We want Microsoft to put pressure on Apple and Samsung with their personal devices, and the Surface tablet devices have been steadily impressing. We can see a lot of potential use cases for a dual screen set-up, so we think that there is potential. We will simply have to wait and see.