Huawei P30 – Is It Really the King of Smartphone Photography? 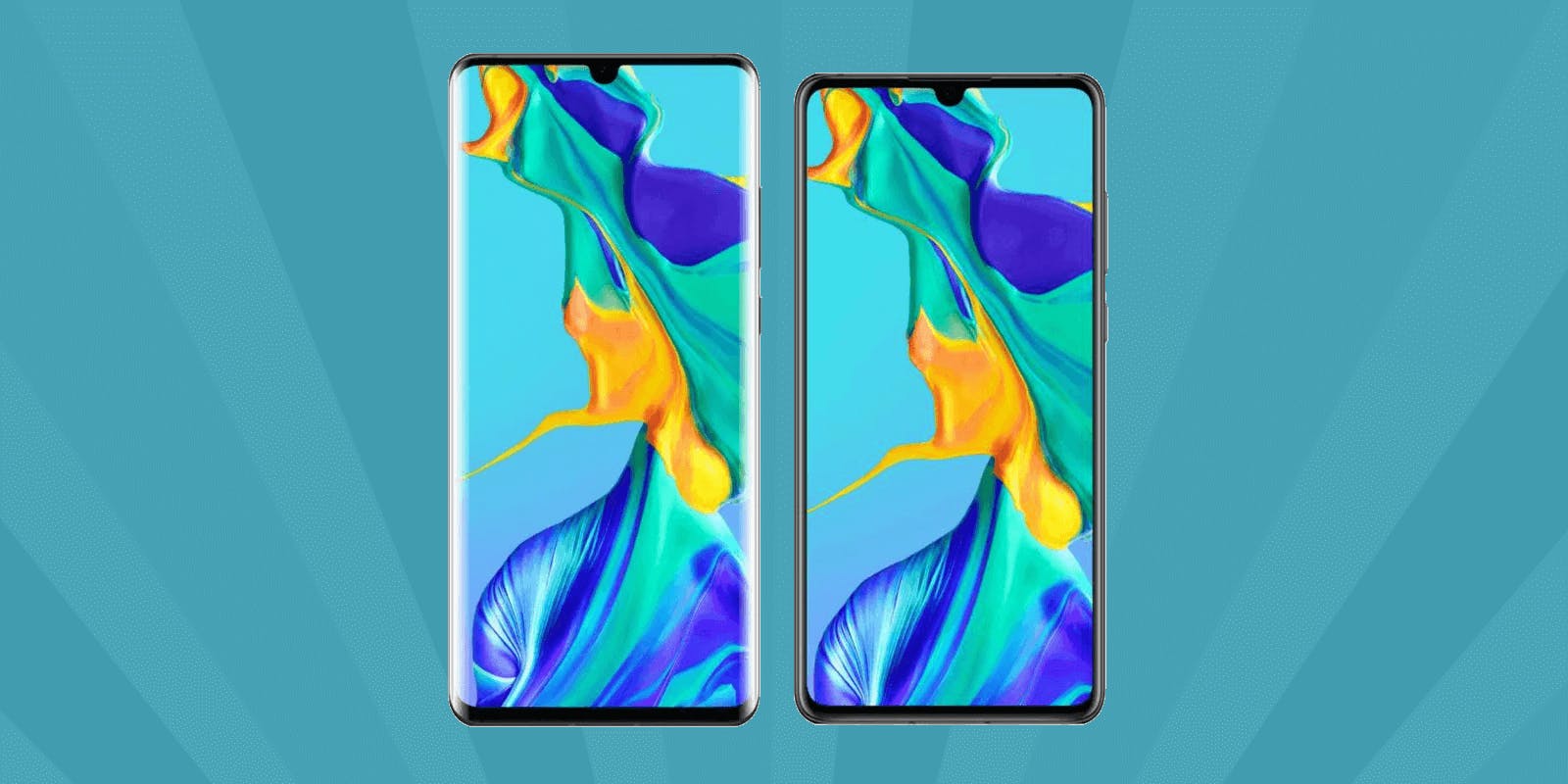 The Huawei P20 (and P20 Pro) really helped to drive home how Huawei had shifted from a cheap handset maker into a bona-fide smartphone superpower. The jubilant reviews and wider public popularity solidified Huawei as a major smartphone manufacturer – one with a new pedigree in resolute smartphone photographic technological genius.

One year on, Huawei has unveiled the Huawei P30 (and P30 Pro). Is the P30 still the best smartphone camera and does it dethrone the Samsung Galaxy S10e and Apple XR. This could be a legitimate option elsewhere for someone that wants quality.

The Huawei P30 will cost £699, the P30 Pro variation will cost £200 extra, so similarities can be drawn between the XR and the S10e versus their premium counterparts. However, this does make it a hundred pounds more expensive than last year’s Huawei P20 offering. Is that extra wad of cash worth it? Let’s find out!

First thing first, the P30 Pro has a raft of new tech updates that are missing from the P30. Therefore, if you have the budget, then you need to think about the differences. However, if this is your flagship level and the P30 is at the very edge of your budget, then what you're getting that the P30 is a phenomenal device regardless of the differentiation between the Pro and P30. 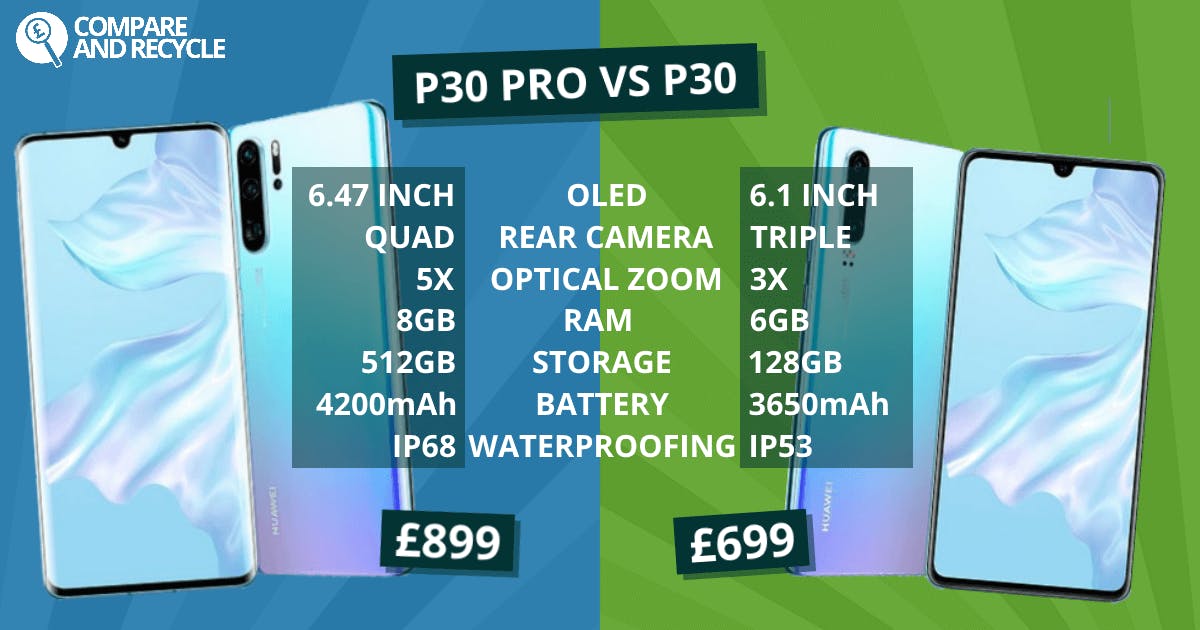 The P20 played on its brilliant (and technically professional) photographic technologies that allowed novices to create photos that trained photographers could take. This is what allowed the Huawei P20 to stand apart from the competition. This year both Apple and Samsung have upped the camera tech ante. What does this mean for Huawei’s P30 handset?

Well to begin with the P30 isn’t an incremental evolution. It is a full overhaul. The P20 had two cameras whereas the P30 has three camera lenses which include a 3x OIS telephoto lens (9MP, F/2.4) and a brilliant wide-angle 16MP (F/2.2) lens combo that really give the camera a fundamentally strong foundation for great photo creation output.

The selfie lens has also been revamped and jacked up to 32MP whilst the main lens has been powered up to a 40MP (F/1.8) with a Huawei “superspectrum” sensor array – which means instead of using a Red, Green and Blue (RGB) sensor the P30 deploys a RYYB which captures yellow instead of green which helps provide for greater palleted contrast.

The Zoom capacity is ridiculous – there is no other word to describe the Huawei P30’s ability on the main lens to create super wide-angle zoom photographic output with impressive clarity that other phone handsets just cannot compete (with some worrying about privacy concerns due to the strength of the zoom technology?).

The technical details aside, this all means the Huawei P30 has the ability to capture a greater array of light within the image processing system which provides a greater clarity of photographic output. This in particular helps in low-light environments and active event (sports) photographic creation.

In relation to the Samsung Galaxy S10 and the Apple XR? Huawei smashes Apple’s now-aged Apple XR handset with the former including a 12MP rear camera with a (F/1.8) wide-angle lens with optical image stabilisation and a 7MP TrueDepth front camera. Whereas Samsung’s epic S10 also has a triple lens array but provides a 12MP + 12MP + 16MP triumvirate which looks sub-standard when placed alongside the Huawei P30’s 40MP + 16 + 8MP+ array.

If the P30 has a great camera, then what the P30 Pro has is out of this world extraordinary. The P30 pro is a QUAD camera monster with crazy 5x optical zoom from an innovative periscopic camera. 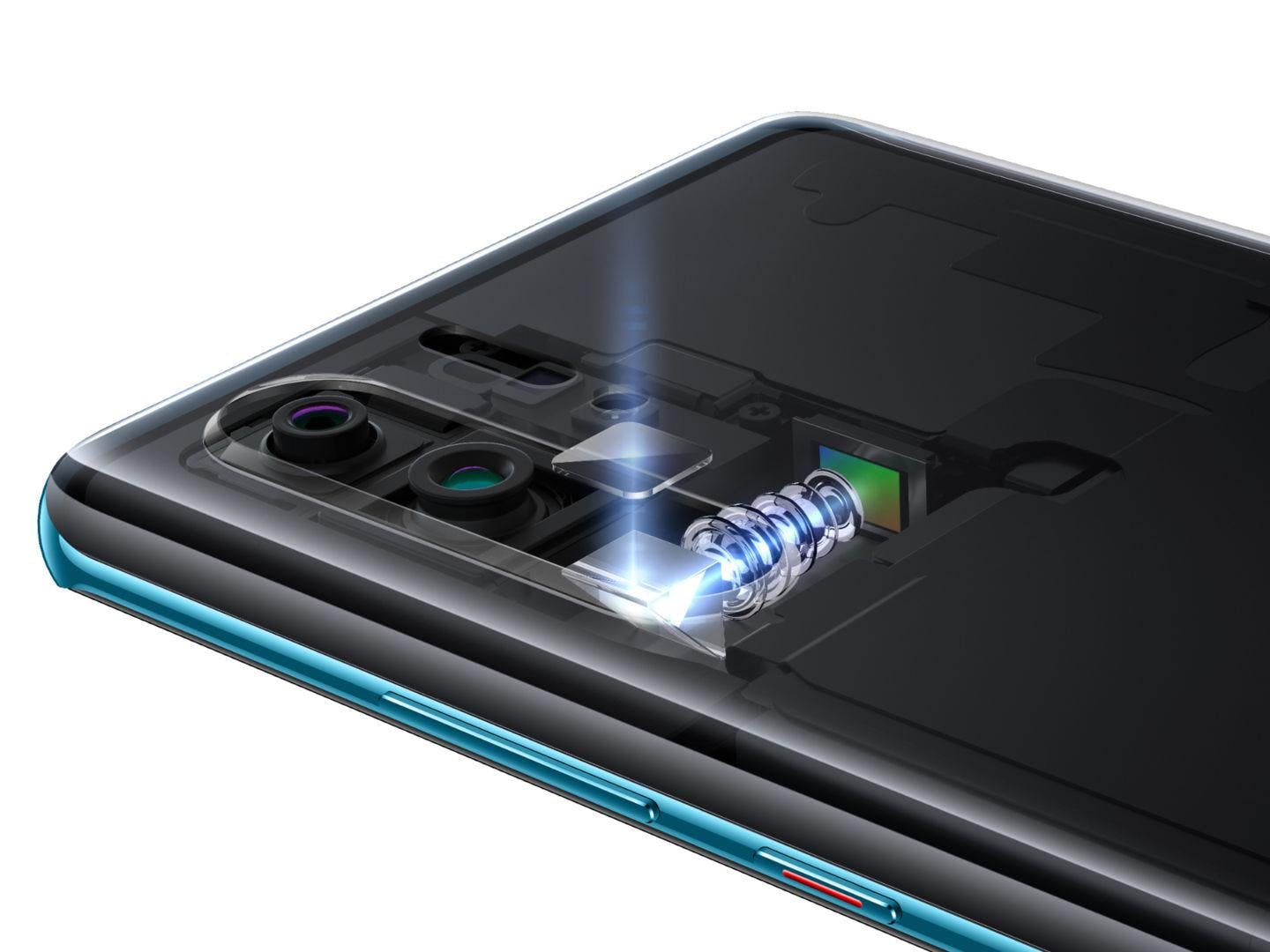 The camera is revolutionary and the Leica lenses stand up to the very best in the business with incredible depth, angle, light intake and they claim the "ultra-sophisticated" image processing and sensor makes pictures brighter and more vibrant than ever before.

The low light image processing displayed in the presentation and then those displayed by The Verge give an impressive outlook on the quality of night time photos.

On the design front, the Huawei P30 has had a great design upgrade which hints at an evolutionary shift rather than a more dramatic revolutionary design change. The P20 wasn’t a design disaster. However, the P30 has taken minimalist design style to the next level. 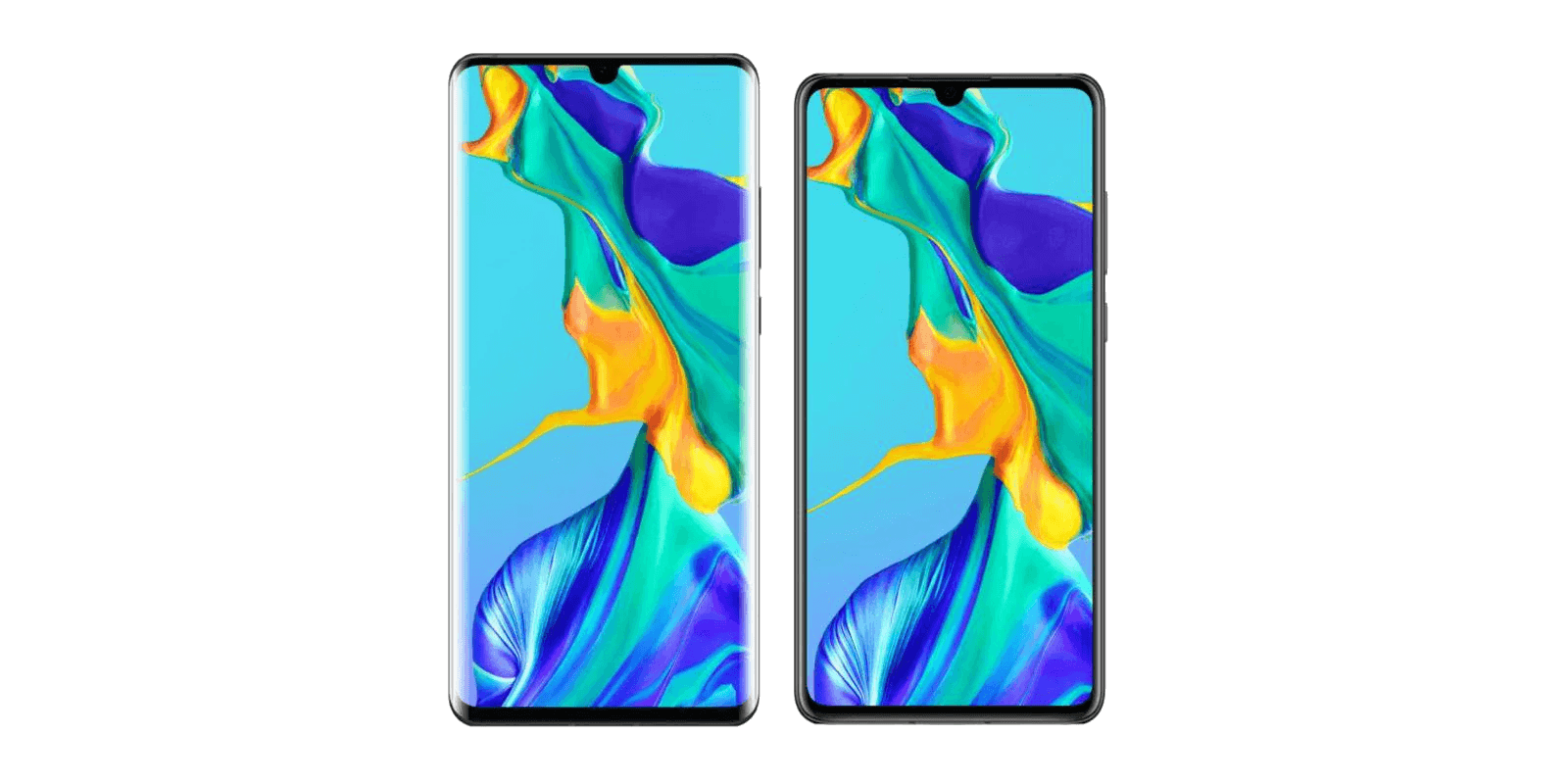 The home button and the notch has gone, and the speaker grill has shifted up to the very extreme top of the device with ultra-thin bezel this allows for a greater availability of screen real estate – which is a big plus. It is only bested by the P30 Pro in that its bigger brother has vibrating audio tech on the bezel/body and has comfortable curved edges to give the design a more premium and secure feel. The handset is very thin but there is a compromise (on both models) in that the super slimness of the handset is offset by the photographic power inside – the lens arrays do ‘jut’ out of the handset and they can be felt during tactile engagement with the handset.

The glass back also provides a beautiful design aesthetic – one that really needs protecting (along with the camera ‘juts’). Therefore, it is crucial that one invests in a good smartphone case for this specific handset. Huawei have created a range of colourful cases for this specific handset and they are available from all good retailers. It comes in three (UK) colours – Midnight Black, Aurora Blue and Breathing Crystal. 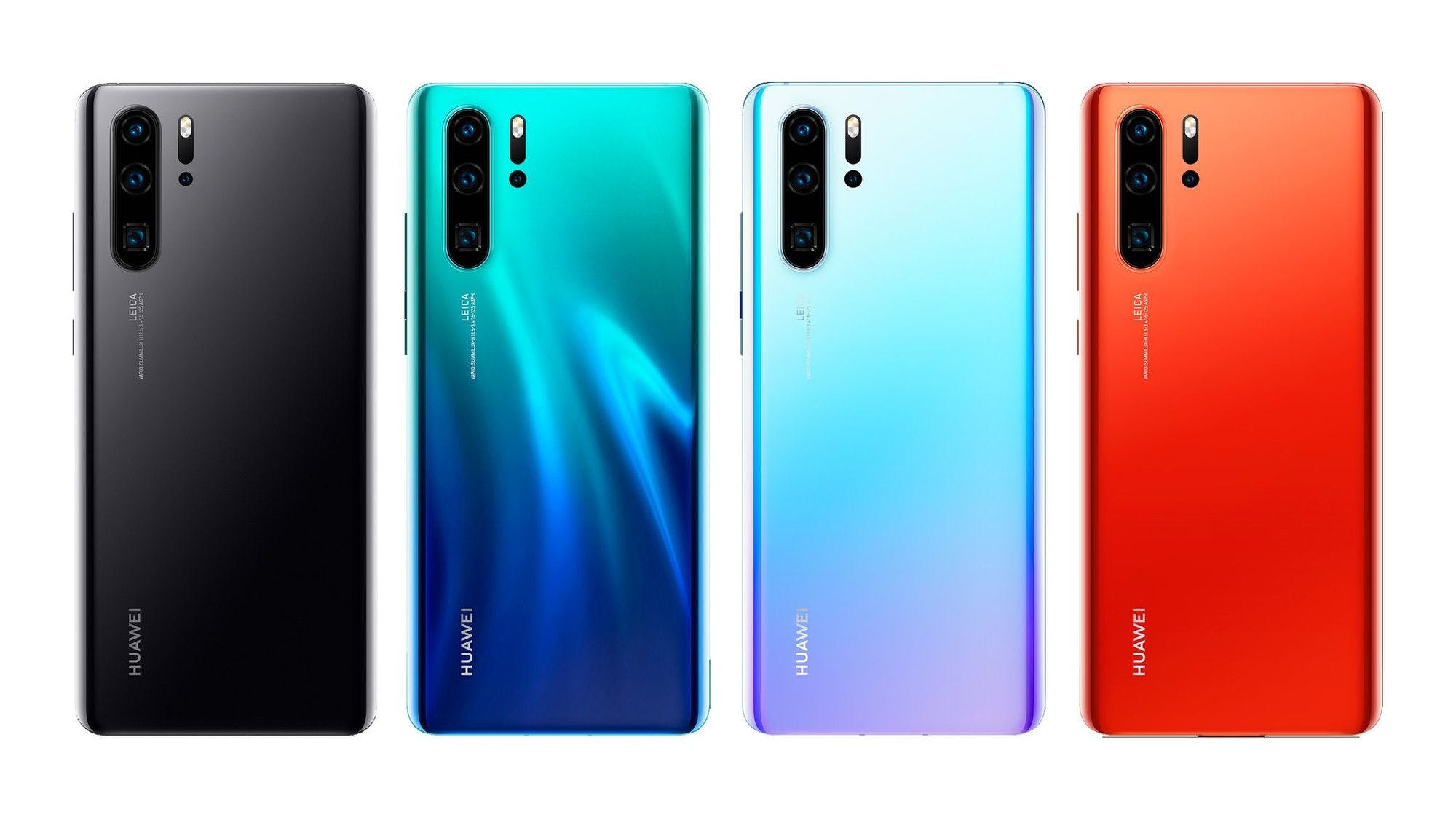 In relation to the Samsung Galaxy S10 and the iPhone XR, the Huawei P30 does hold its own. The iPhone has long dominated the technical aesthetical beauty of handset design (although that has been in decline). However, Samsung’s move from bulky plastic to premium design style has allowed the S-range to really flourish. Therefore, in relation to these two handsets the Huawei P30 does provide a visual air of style and a premium tactile feel.

The Huawei P30 boasts a 6.1-inch OLED screen which is the exact same dimensions as last year’s P20 offering. However, the resolution has improved to 2340x1080 – the Pro 3 does offer increased screen real estate and resolution technology. However, it doesn’t match up to the 4k power of Samsung’s HD largess in the S10. It does best the Apple XR which offers only 828x1792 resolution as oppose to Huawei P30s 1080x2340 pixel resolution. This means the Huawei beats the iPhone but pales in comparison to the Samsung’s HD supremacy. So if you want “the best screen on the market” then look elsewhere but don’t be under any illusions; this handset’s display is superb and with stand toe-to-toe against the entire flagship smartphone collection.

The Huawei P30 includes a powerful Kirin 980 processor which is beautifully paired with 6GB of RAM and 128GB storage (in the standard model) which is upgradable to 256GB via MicroSD support. The powerful specs allow for super-smooth near-lag-free user experience. Unless you’re a major smartphone gamer, then this will be a flawless user experience thanks to power under the hood. When compared to the Samsung’s Exynos 9 Octa or Apple’s A12 bionic it sits broadly in the middle. The Hexacore Bionic A12 comes in at 2.49GHz whilst the Exynos 9 Octa 9820 comes in at 2.73GHz the Kirin 980 comes in at 2.6GHz. It doesn’t beat the Samsung on power, but it does beat Apple’s best offering.

In terms of software, iOS has long been a popular choice thanks to Apple’s update policy and lack of fragmentation. Another issue is the deployment of handset manufacturer UI on top of Android. The EMUI Huawei UI place above Android 9 does feel a little clunky – especially opposite Samsung’s OneUI experience and Apple’s beautiful OS ecosystem.

Which One Should You Get?

The Huawei P30 is an evolutionary next-step flagship handset device. It continues to push the boundaries of excellence regarding smartphone photographic technologies. The P30 offers best-in-class photography for smartphone users but it is held back by elements of its specs but its buoyed by an epic battery and a beautiful design that together just about works. It isn’t perfection, but it is a joy to behold. The technical drawbacks won’t be noticed by 90% of users – those hardcore gamers and snappers will notice lags. However, average handset users will love it. It brings together the design needs, the battery needs, the photographic needs with a strong spec showing that provides an environment for a superb handset and that’s what the Huawei P30 is – a great handset. Huawei has really thrown down the gauntlet for the competition in 2020!