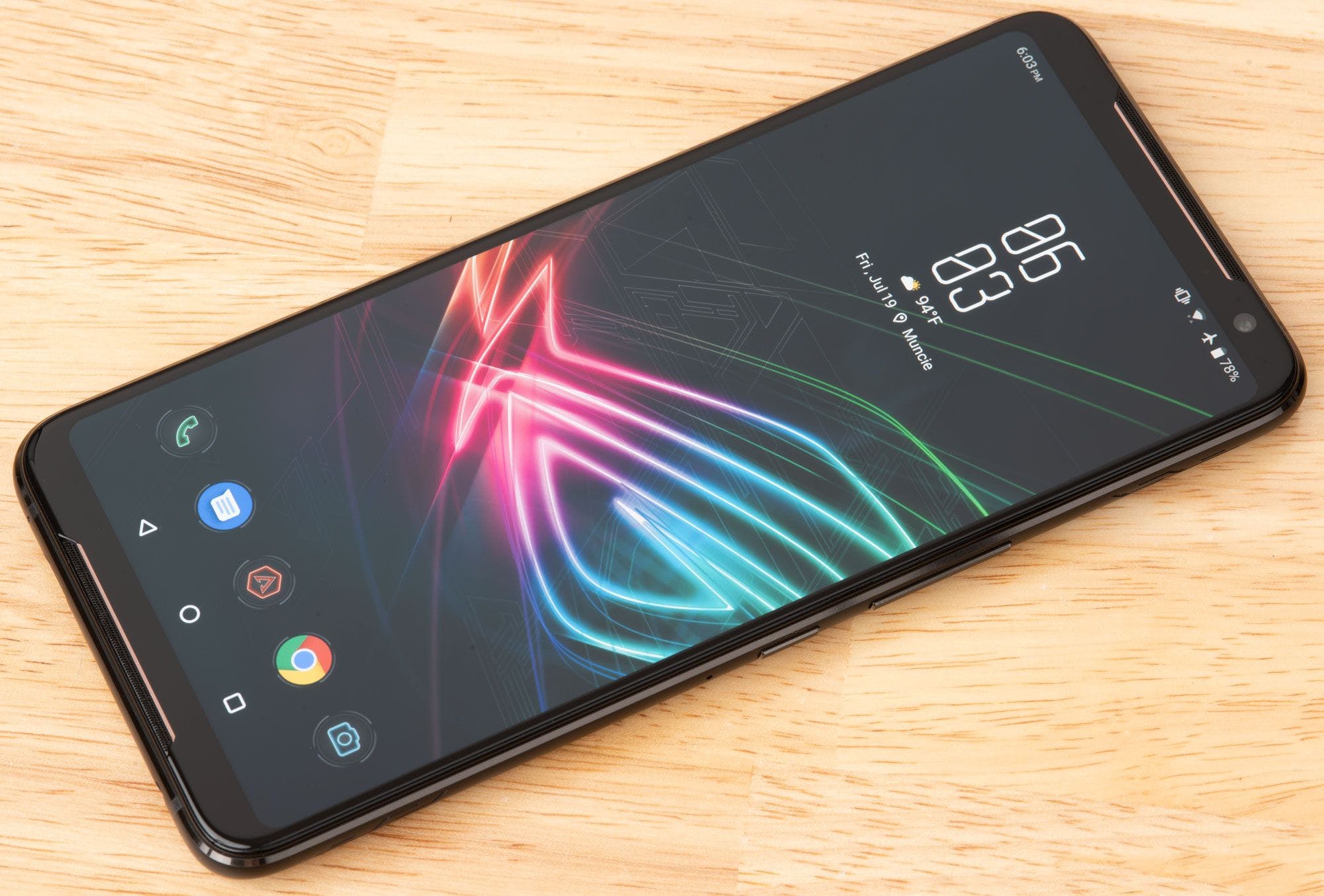 A year after testing the waters with their specialist gaming phone, they are back, hitting the gaming-hungry market with the best specs available. ASUS are pushing their Republic of Gamers brand with their better-in-every-single-way device.

The first ASUS ROG phone was rather an impressive phone, but there was not much that set it apart or pushed it ahead of the already impressive competition, the Razer, and the budget but equally impressive BlackShark. The ROG Phone 2 truly raises the bar on mobile gaming.

Demoed at the Tencent games launch event in Beijing, the ROG 2 is the first device to have the Snapdragon 855+ chipset that was premiered just last month.

A Shot at the Best Gaming Screen

With upgraded power, ASUS are running a 6.59 AMOLED screen with no curved edges or notches, just tight, clean looking bezels that should be a bit more forgiving of sweaty palms. For full screen games you get a bit of extra viewing without your appendages blocking your view.

The refresh rate has also received an upgrade to bring it in line with the Razer 2 at 120Hz, but with a 240Hz touch sampling rate. This means that it has very little lag from user input, which is extra important for lining up headshots in PUBG.

Even for video, the screen is something to behold, with a 10-bit HDR support providing sharp contrasts and vivid colours. Whether you're watching videos or playing games, your eyes will be in for a treat.

The actual look of the device is likely to be divisive however, as it looks very similar to last year's model. It has the same stylized back plate and the ever present light up logo, but some would argue that this is a must to set a gaming phone apart from regular smartphones.

You can expect ASUS to take the peripheral scene to the next level with its handheld ROG Kunai Gamepad that attaches to the device, which advances the usability with the familiarity of physical buttons and thumbsticks. An added bonus is that it keeps your hands away from the main heat source, which makes for a better gaming experience all round.

Alongside the controller, you can plug in the AeroActive Cooler 2, an active cooling system that amplifies the removal of hot air from the vent on the back of the phone. The cooler also allows you to flip where you plug in the headphones and charging port, which makes it feel more akin to the XBox or Playstation controller.

If you're not using the controller, the updated air triggers have been improved with a slight haptic feedback when you hit them which creates significantly less of an input lag than the original ones.

For those who want to go all-in on the ASUS accessories, there is the TwinView Dock 2 that adds a superfluous second 120Hz screen and a 5000mAh battery which turns the ROG Phone II into a glorified console as with it you can stream your gaming session to a monitor or TV. This may be overkill for some, but it goes to show that ASUS are not skimping on any of their internal or external features. 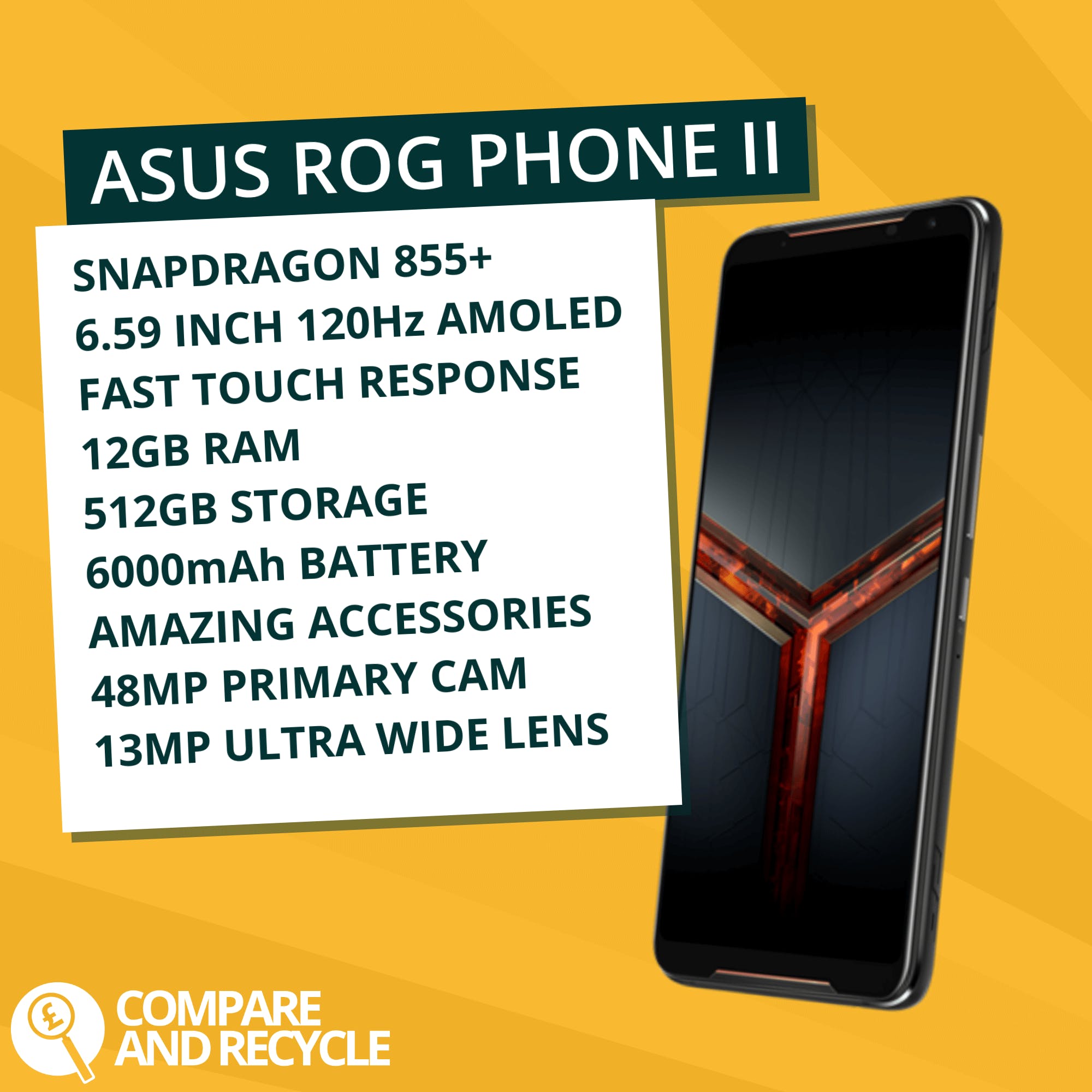 Choice of OS and Internal Specs

One of the most interesting steps taken by a manufacturer that we have seen for quite some time for a smartphone device is that the ASUS ROG Phone 2 allows you to choose your operating system during its initial setup. You can choose the standard Android Pie, or you can add the ASUS skin over the top which should pave the way for more choice in the initial setup of a device. We like that the user gets more freedom, even if it's only superficial.

Dual vibration feedback and a huge 6000mAh battery should last you up to 3 days of normal usage. 30w fast charging also means that you can keep playing even if it's plugged in. The battery inevitably adds to the weight of the device, which is 240g, however this is the price you should expect to pay for high power gaming.

ASUS haven't cut corners on memory, which is a standard for a flagship device. You can get up to 12GB RAM and 512GB of internal storage, which should come as no surprise.

The powerful camera on the ASUS Zenfone 6 has been brought to the ROG Phone II to our delight, as the Sony IMX586 sensor performs well even in less than ideal conditions. It has the 48MP primary and 13MP ultra-wide secondary rear cameras with the ability to shoot at 4K resolution and 60FPS.

Being the first for the new chip is certainly a draw. But this doesn't sing loudly enough, as there is also a brand new Adreno 640 GPU which will power the best games at a huge 675Mhz.

With these higher clock speeds, Qualcomm claims that it can achieve a 15% boost to GPU performance. Tests by Geekbench in the pre-release testing doesn't show quite the same increase, but coupled with the 120Hz screen, this could provide the advantage needed against its competitors.

Our Verdict on the ASUS ROG Phone II

The ASUS ROG phone is equal parts exciting, ambitious, impressive and crazy. They have squeezed as much out of the tech as they possibly could have done, and what they couldn't, they've added as an accessory. You can't argue with the tech of this phone, but whether or not you will make the most use of it is up to you.