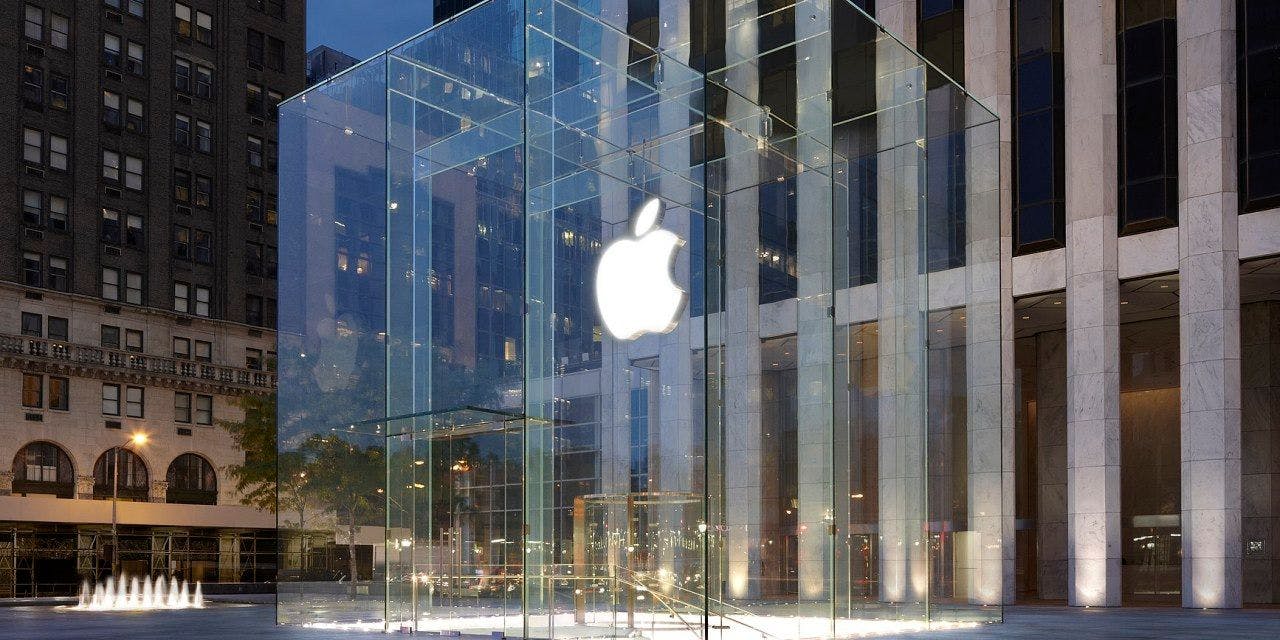 The relationship between rampant consumption and the environment continues to dominate as one of the most prevalent and controversial issues of our time. The production of smartphones is arguably one of the most notable examples of how technology can adversely impact the natural world and communities if measures are not implemented to minimise the environmental damage.

Apple, one of the world's largest tech companies and a huge growth driver in the industry, has come under fire on multiple occasions for its environmental footprint. As a response to this in recent years under the helm of Lisa Jackson, the Vice President of Environment, Policy and Social Initiatives, they have endeavoured to integrate sustainability across all of their business activities.

But just how much progress has Apple made over the past year, and are they doing enough? Here are some notable examples of sustainability developments that have taken place at Apple from 2018 to 2019, including our own Compare and Recycle research: 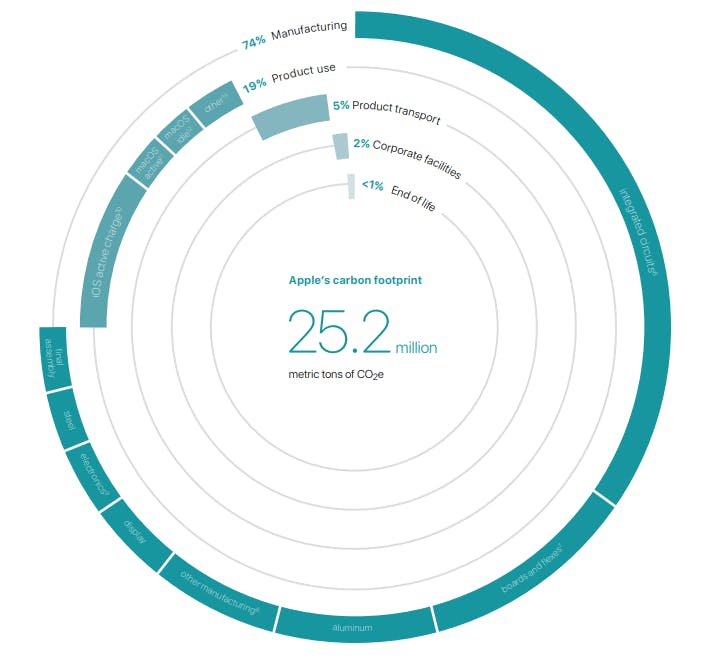 Apple have also been making a concerted effort to use less plastic. In 2018 for instance, the iPhone 7, iPad Pro and the 2018 iPad were given a fibre alternative to the former plastic trays in the packaging, and 100% recycled fibre in iMac Pro's packaging instead of expanded polystyrene. The iPhone XS and XR, iMac Pro, MacBook Air, iPad mini and iPad Pro now come with majority-fibre packaging. There are now also 100% fibre retail bags in all retail stores, which have knitted paper handles and are made from 80% recycled fibre.

In 2018, Apple successfully developed Daisy, a robot capable of disassembling nine different versions of the iPhone and sorting their parts for recycling. Daisy is capable of taking apart up to 200 iPhone devices per hour, and has a smaller carbon footprint than its predecessor - Liam. In 2019, this technology has been implemented in multiple locations around the world, and Daisy is now able to disassemble a total of 15 different iPhone models.

According to Apple in their 2019 Environmental Responsibility Report, the measure of their product emissions takes into account the manufacturing process, transportation, usage and end-of-life emissions of their products. From fiscal years 2017 to 2018, we found that the amount of greenhouse gas emissions per product across all of the Apple range on average overall has decreased. 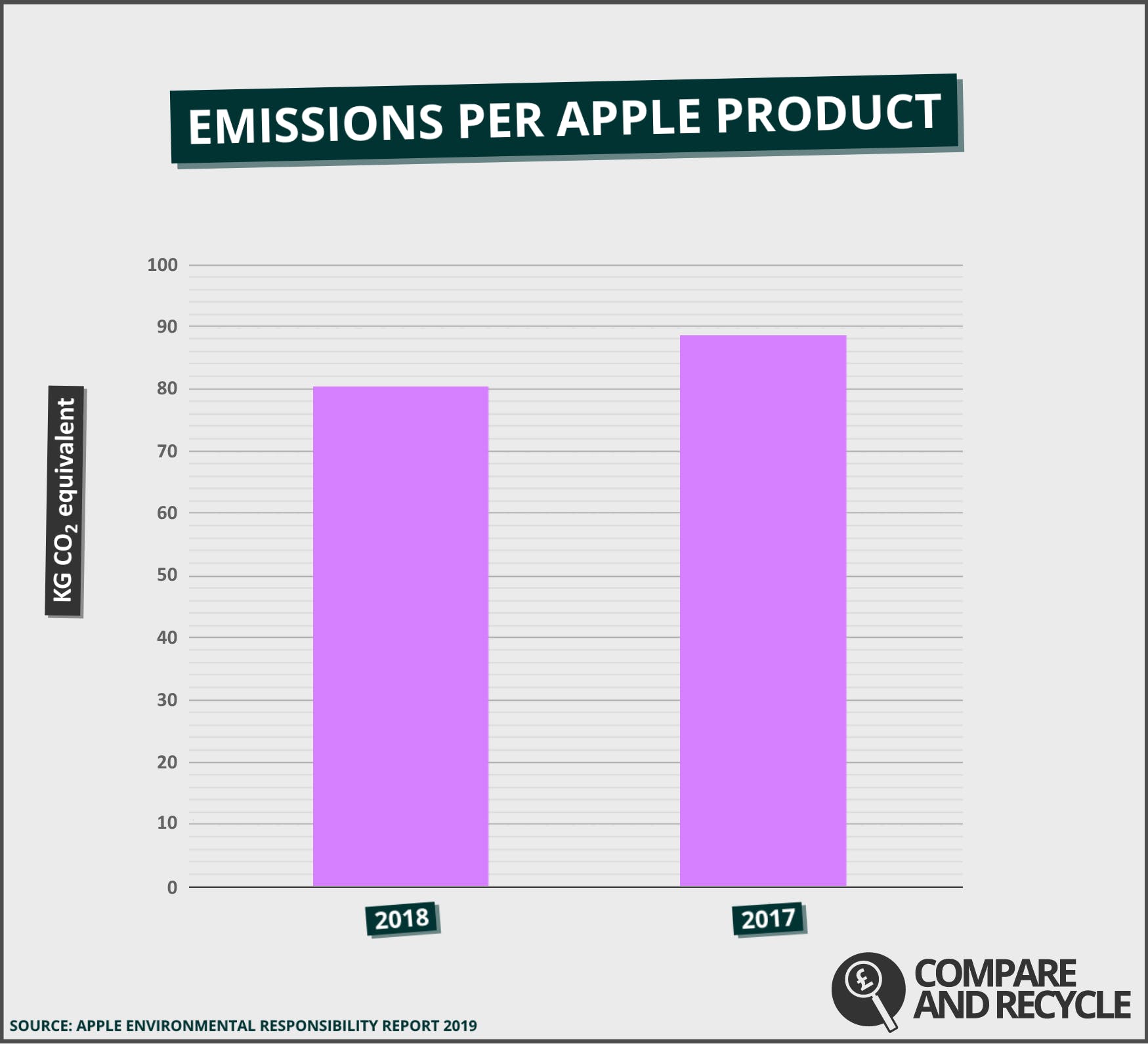 Below is the breakdown of each iPhone model and the amount of CO2 equivalent (-e) that it produces. The data shows that the 256GB iPhone X produces the third largest amount of CO2-e, shortly after the iPhone 6. The iPhone's CO2-e varies based on the capacity of each model. The variance accounts for the fact that after each capacity upgrade, around 20% more emissions are produced during the manufacturing processes. 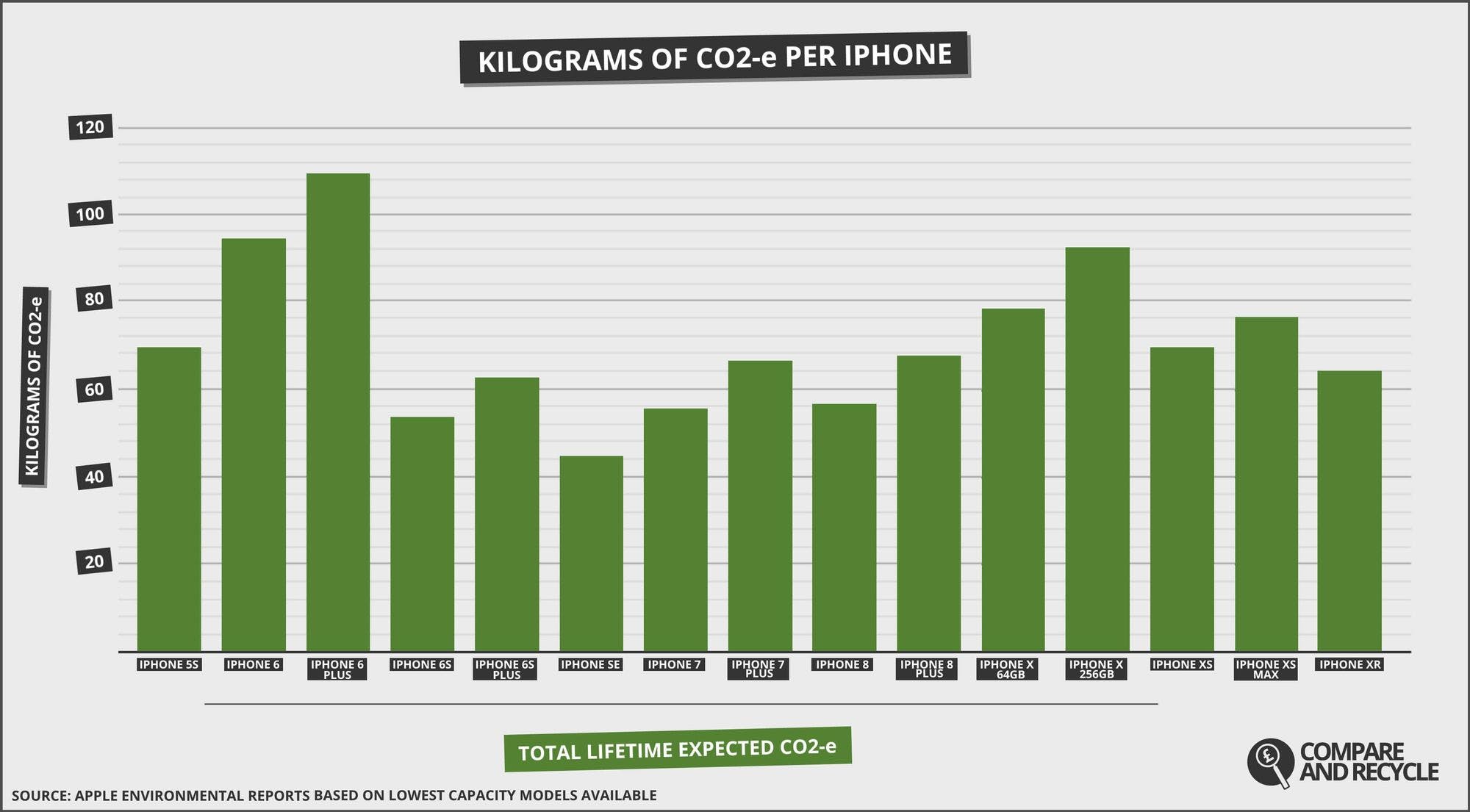 Waste generation refers to the ways in which materials are disposed of after they have been used, either by getting taken to landfill sites, recycled, stored as hazardous waste, composted or converted into reusable energy. From fiscal years 2015 to 2018, Apple has massively increased its amount of recycled waste, which is a significant improvement towards overall sustainability for Apple. 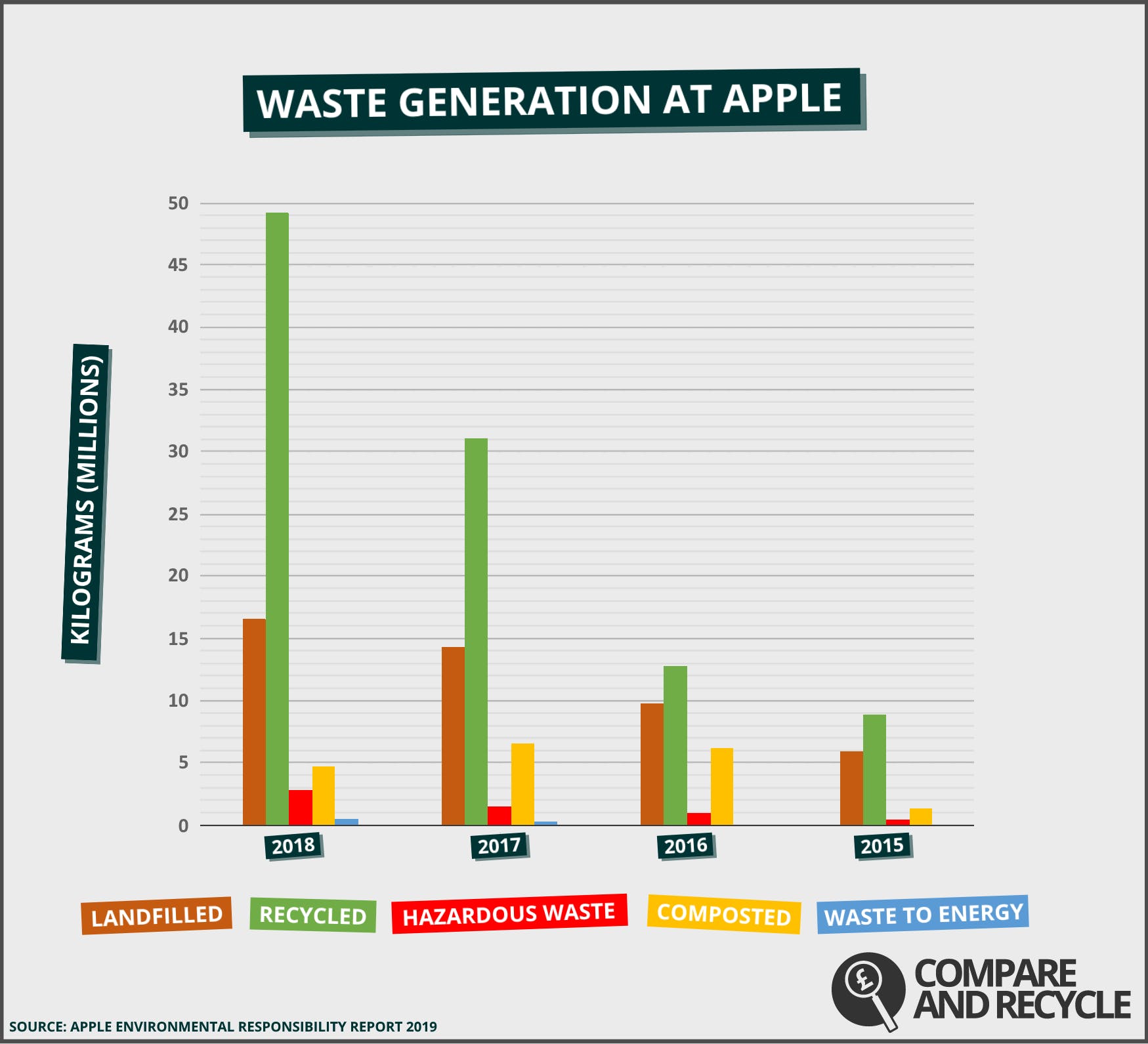 Despite the fact that Apple has taken action by largely increasing the recycling of its waste, they have also increased the amount of waste material getting dumped in landfill sites. This is primarily because of an increased volume of products sold overall in recent years. From fiscal years 2015 to 2018, there has been a steady increase of this form of waste generation. 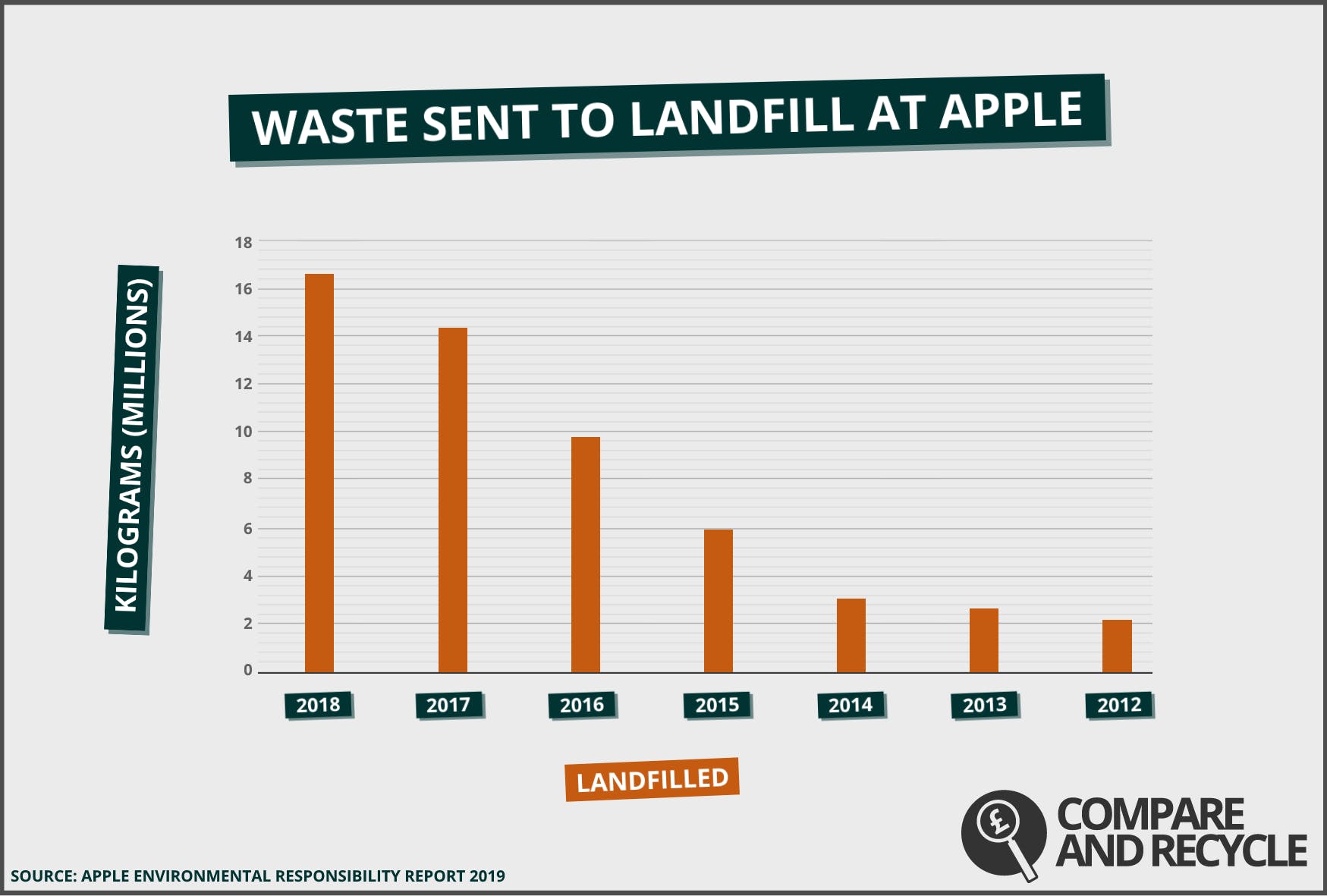 On average, British consumers throw away between 20 and 25kg of e-waste each year, and most of this waste ends up in landfills. The rising costs of disposal has resulted in the exportation of tons of e-waste to developing countries, where it is dumped then later broken down for scrap by workers. These sites are unsafe working environments, as the workers are often exposed to hazardous substances from the burning of various materials. Depending on the material burned, workers can be exposed to an array of hazardous substances, including carbon monoxide, dioxin and heavy metals. 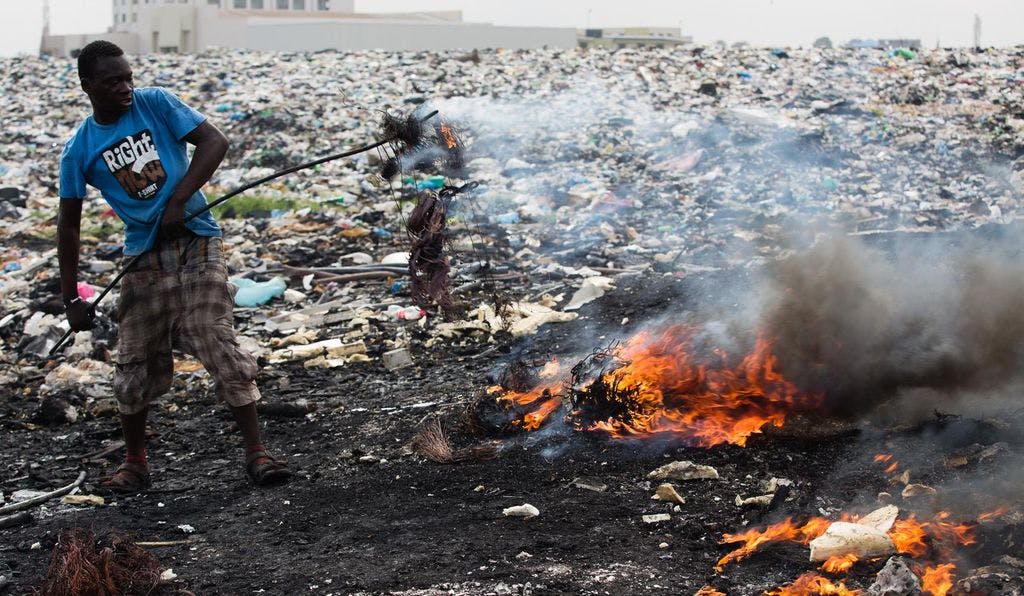 Used electronic devices including iPhones contain hazardous materials which, if not handled properly, can contaminate air, water and soil. For instance, the process of de-soldering and removing computer chips (which can be found inside iPhones) involves open burning and acid baths which can cause air emissions and discharge of beryllium, cadmium, brominated dioxin, glass dust, lead, mercury and tin into rivers. It is therefore discouraging to see that Apple's hazardous waste and landfill waste have increased beyond 14% which would have reflected their growth in business year-on-year. 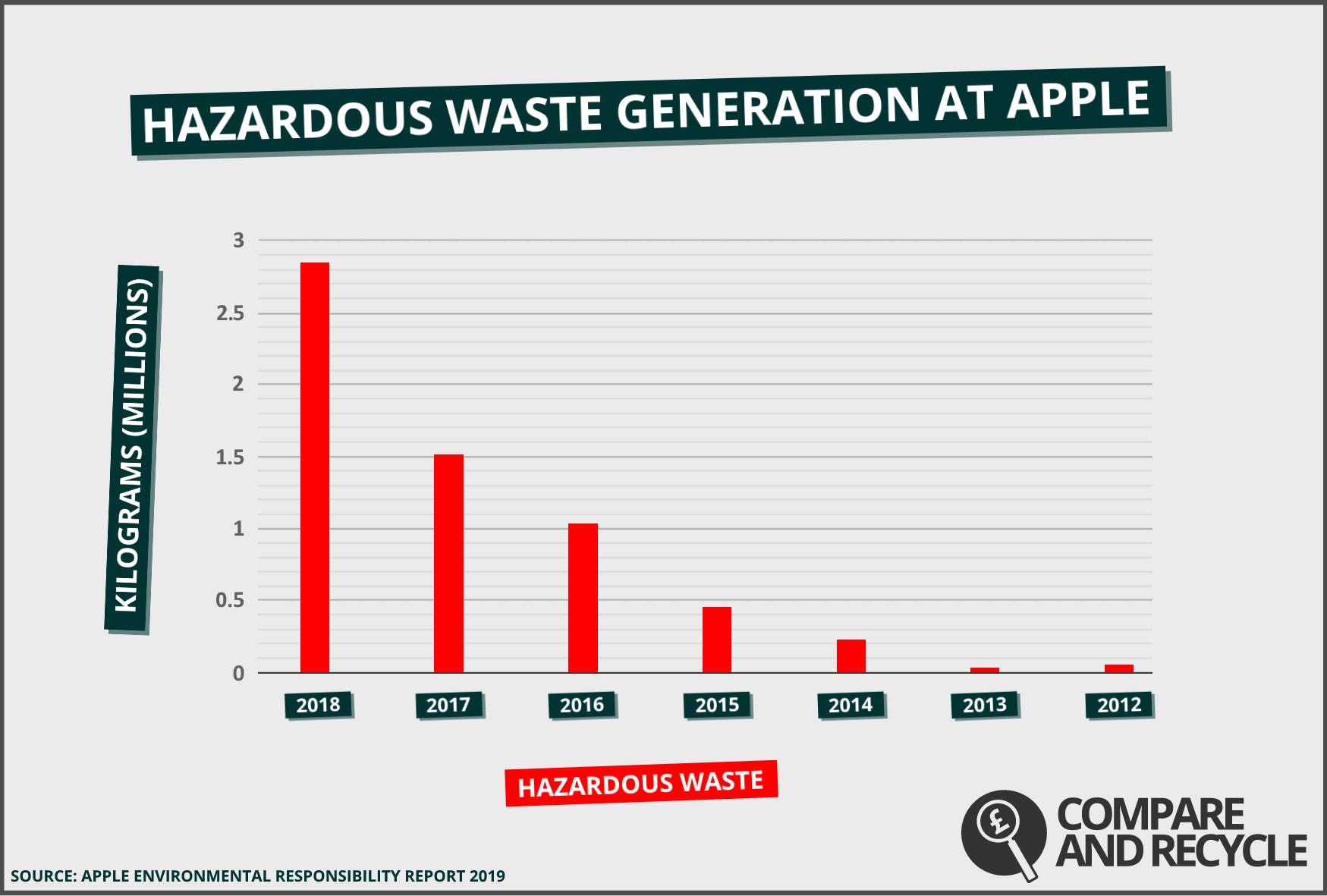 As consumers, we are constantly demanding the latest smartphone upgrade even though continuing to use current phone models for up to four years can decrease environmental impact by up to 40%. It is in Apple's business interest to continually respond to consumer demand by selling more devices, however this will lead to more environmental damage over the next few years.

Despite its environmental shortcomings however, Apple is still addressing the need to prioritise sustainability across all areas of their business, which is more than can be said of other smartphone manufacturers that we know of, who do not publish comprehensive environmental reports about their business activities in the same way that Apple does. Apple has continued to be a leader in terms of pursuing sustainability in the long-term within the electronics market, and we hope to see other manufacturers following suit at some point in the near future.