Few people who’ve got their hands on a Samsung Galaxy S6 would tell you that it isn’t one of if not the best phone available today, and most of those who say otherwise probably own an iPhone. While the S6 is great looking, super fast and has an incredible camera the thing many owners would change if they could is the TouchWiz software that comes with Samsung Android phones. The new Material theme for the Galaxy S6 can’t remove TouchWiz but it certainly makes it a lot nicer. 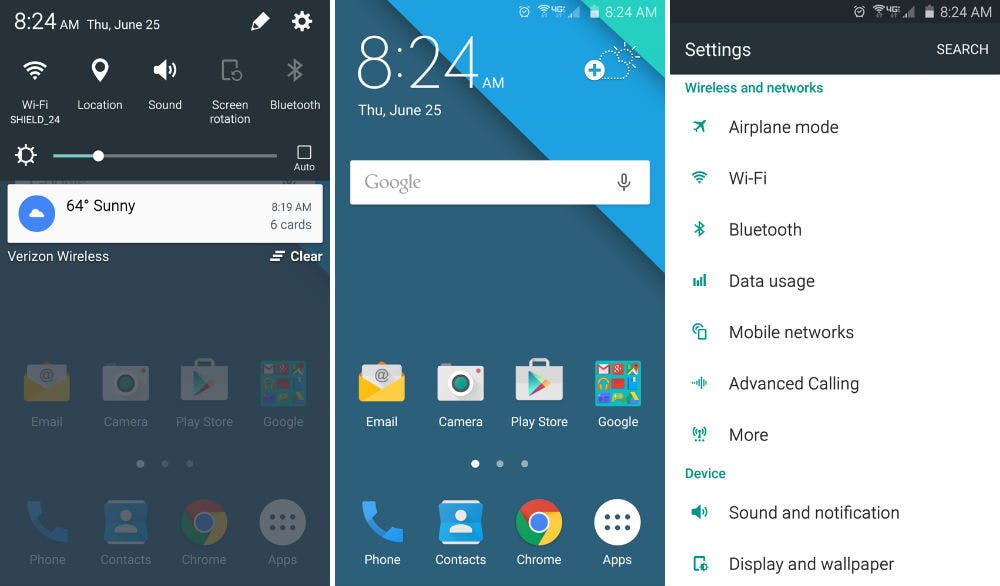 Android Lollipop in it’s original form is not only beautiful but very clean and great to use. TouchWiz has definitely improved over the years but with the exception of some nice additional features, TouchWiz is probably worse than stock Android is just about every way. Unfortunately there’s no easy way to switch to stock Android and doing so would require you root you phone which could mean no Samsung Pay support in the future.

Yesterday a ‘Material’ them was released in the Samsung Theme Store which doesn’t remove TouchWiz but changes the way it looks quite a bit to be more comparable to the default look of Android Lollipop. Most of the interface has been altered with the keyboard, notification shade and most default apps looking close to stock Android. The generally horrible Samsung icons for apps have been replaced with some which aren’t quite the same as Google’s but are close enough.

The reaction to this new theme has been very positive and although you’re still using TouchWiz everything is generally a lot more attractive even if there are plenty of things that can’t be changed by a simple theme. The Material theme combined with a replacement launcher such as Nova and switching to the stock apps offered by Google on the Play Store you can get your S6 fairly close to the pure Android experience which in our opinion is preferable to how the Galaxy S6 arrives from Samsung.

You can get the Material theme by heading to the Theme Store on your S6 right now.