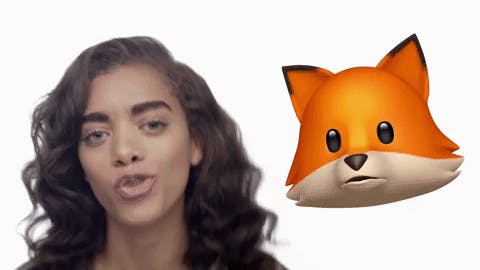 Apple took the wraps off its completely innovative device in comparison to the rest of iPhone line up. The high-end smartphone – iPhone X (reads as iPhone 10) – marks a tremendous change in iPhone design and takes its place in line with awesome, bezel-less phones released earlier this year.

iPhone X is moving in new direction. It took Apple 18 devices and 10 years of evolution to introduce such impressive smartphone.

Do you really want an iPhone X?

Over the past two days since the announcement, a lot of discussions are going on around new features and upgrades that come with iPhone X. Let’s get down to the specs that can make you want one, really want.

This year Apple choose to cover its anniversary phone in all-glass much like the iPhone 4 and 4s. In order to tackle the durability issues with back and front glass panels used in the past, iPhone X’s ultra-strong glass claims to make spider web screens a thing of the past.

We finally see Apple jumping on an OLED-screen trend that Samsung been producing for years. The brand-new handset features 5.8 inches Super Retina OLED screen ditching the LCD panel that we still see in recently announced iPhone 8 series and last year’s iPhone 7 and 7 Plus.

The cutting-edge OLED based screen allows iPhone X to upgrade to a resolution of 2436 x 1125. New screen technology provides blacker blacks and whiter whites making colours rich and leaving that touch of brilliance to anything displayed on the iPhone X.

You won’t see any bottom bezel, however, there’s a notch that cuts into the screen and hosts camera sensors and speaker. You might think it will get in the way when gaming or watching movies. You shouldn’t worry too much, it’s not going to ruin apps. It will let you get the most use of 18:9 screen ration (TBC) and additionally Apple had to come up with an alternative iPhone defining feature. 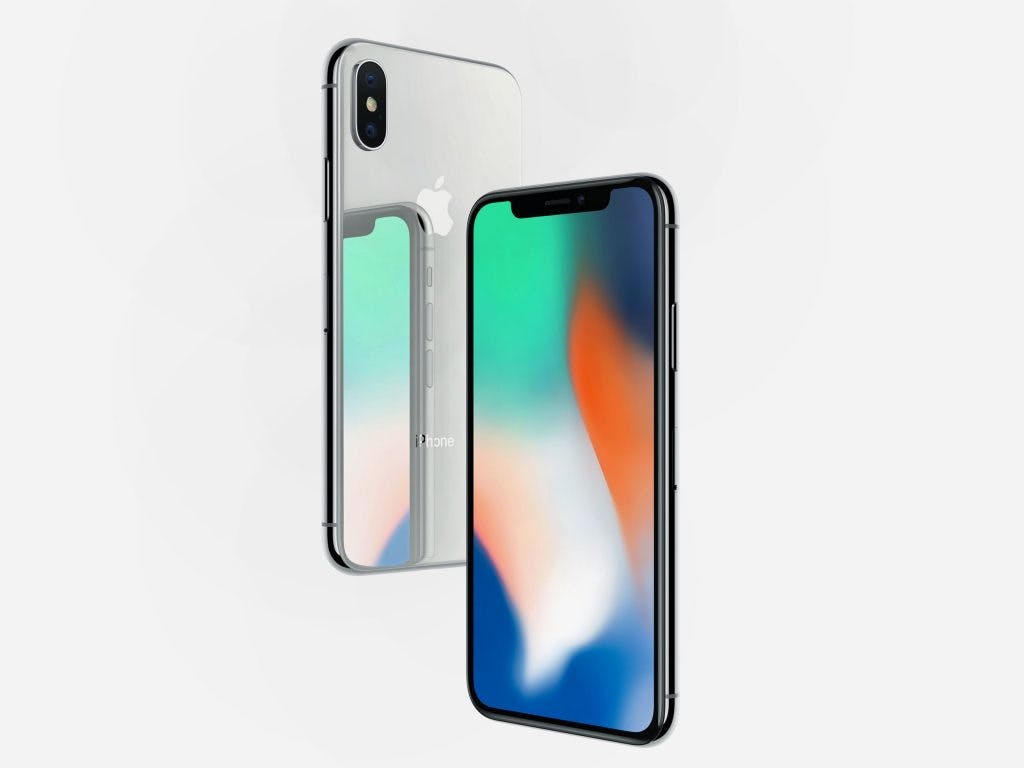 Don’t look for it, it’s not there. Same as Apple removed the headphone jack last year, this September they crossed out the physical home button to welcome pressure sensitive 3D Touch and Face ID – 3D facial recognition technology. From now on the interaction with iPhone X is entirely gesture-based. Swipe it, left, right, hold the tap longer and not a single click. You can access the control swiping down from the top. The home screen is now upward-from-the-bottom-gesture away.

Together with the home button, we waved goodbye to fingerprint scanning. Instead, you can unlock your iPhone by simply looking at it. Apple claims that Face ID is more secure than fingerprint scanner as there’s only 1 chance in a million your face can be faked. The trick behind Face ID is that machine learning adapts to your facial changes and uses True Depth camera and multiple sensors hidden in the top notch to scan your face. Even in the dark. Even you are wearing a hat or spectacles, or growing a beard over night. 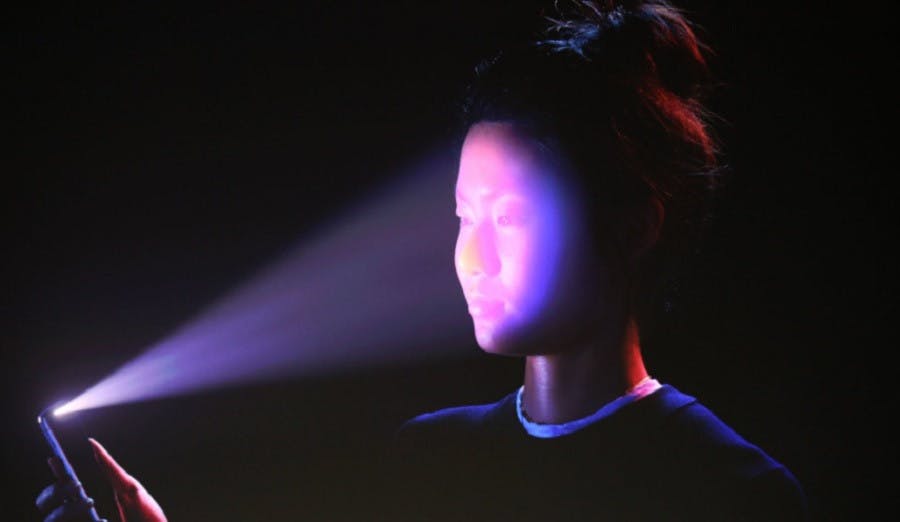 The camera sensors stick to same specifications as last year – wide-angle 12 MP lens and 12 MP telephoto lens. This year’s dual cameras do have a redesign. Dual optical image stabilisation makes images blur-free even when zooming in. Camera sensors are larger and faster and we see a f/2.4 aperture improvement on telephoto lens. The new, advanced Portrait Lightning Mode is a game changer in smartphone photography. Your portraits with added blur-background can be transformed applying lightening effects on model’s face, much like studio lights. 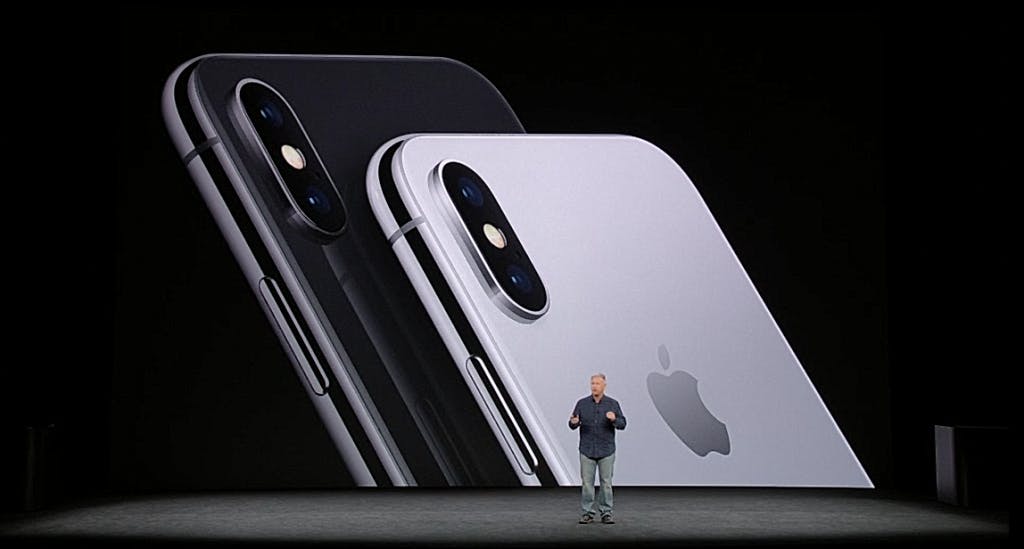 Let’s get back to the TrueDepth camera benefits we mentioned briefly. The 7 MP TrueDepth camera with ambient light sensors, proximity sensors, dot projector and flood illuminator (all those face-mapping sensors) can capture your facial expressions, mirror them and guess what? – apply on an emoji. Yes! Any emoji – fox, cat, piggy, monkey and even silly poo! What’s more crazy you can record a video and send it to your friends over iMessage.

All the above mentioned techy features are enabled with a smartly designed, new A11 Bionic chipset. The six-core chip will power latest augmented reality apps and 3D games. Apple hasn’t mentioned anything about battery capacity or RAM specifications, but rumours suggest iPhone X will sport 3 GB.

The glass back was a design solution to offer fast wireless charging to iPhone X owners. Apple claims it will last 2 hours longer than on iPhone 7 and will charge up to 50% in 30 minutes. The only unwelcome news is that you’ll need to purchase separate charging adapter to experience fast charge capabilities.

We’ll have to wait until November 3 for the iPhone X to come out and it can be pre-ordered starting from October 27. Space grey or silver water-resistant (IP67 rated) iPhone X will cost £999 for 64 GB storage version and hefty £1,149 for the 256 GB.

Okay, if you trade in your old iPhone for the most cash, you might be able to afford the radically redesigned all-screen iPhone X. With extra cash invested towards the upgrade, it won’t seem so costly, we hope.

The level of craftsmanship Apple reached with its iPhone X is incredible. It is the most advanced iPhone to date. Our first impressions are great as this device means a step to the future for the company. We shall wait for the phone to be released and see how it performs in comparison to Android flagships. Well done, Apple!