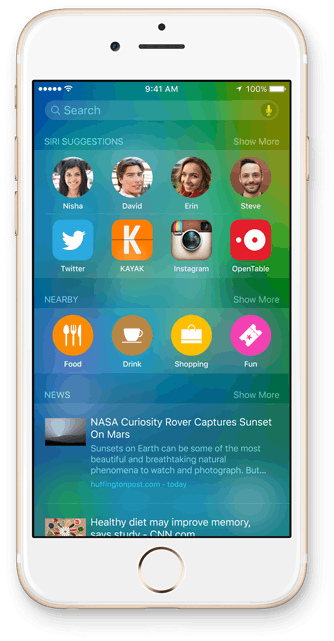 There was a time when you bought a phone and it stayed just the way it came forever, nothing new was added, no bugs or security issues were fixed and everything would look just how it did the day you first switched it on. As phones became more powerful manufacturers began to release updates to either fix things or add new features and we’re now at a point where a phone which is a few years old can receive a major overhaul making it feel brand new again.

iOS updates have been a mixed bag in the past, sometimes changes can break things or push an aging phone to the point where it struggles and becomes unbearably slow. The opposite can happen too with updates improving the experience massively although any changes will always get their supporters and detractors. iOS 9 is Apple’s upcoming update for iPhone, iPad and iPod touch devices and will look to add features, improve existing ones, and fix bugs and other issues too.

Even if you don’t have the latest iPhone or iPad you can still get your hands on iOS 9. Existing devices to receive the update are: iPad 2, iPad 3rd gen, iPad 4th gen, iPad Air, iPad Air 2, iPad mini, iPad mini 2, iPad mini 3, iPhone 4s, iPhone 5, iPhone 5c, iPhone 5s, iPhone 6, iPhone 6 Plus, and iPod touch 5th gen. When they’re released the iPhone 6s, 6 Plus, iPad Air 3 and iPad mini 4 will come with iOS 9 installed. The iPad 2 and iPhone 4s were released in 2011 but are still going to be updated, you could argue Apple doesn’t need to keep supporting such old devices but it’s great to see they have.

ready. Siri will be 40% faster and 40% more accurate after the new update so Apple expect to add to the one billion requests Siri already handles a week.

Apple Pay is expanding with the UK joining the party, Canada and China are rumored to be up next and rewards and store-issued cards are to be supported. The Password (the Apple Pay app) will be renamed Wallet accordingly. Newsstand is becoming simply News and is a Flipboard-style news aggregator which Apple claims will help keep your data anonymous.

When Apple dropped Google Maps for their own Apple Maps the reaction was far from positive when many simply installing the Google Maps App and using that instead. Apple continue to improve their own Maps app and the iOS 9 update brings public transport directions including buses, trains, subways and even ferries. 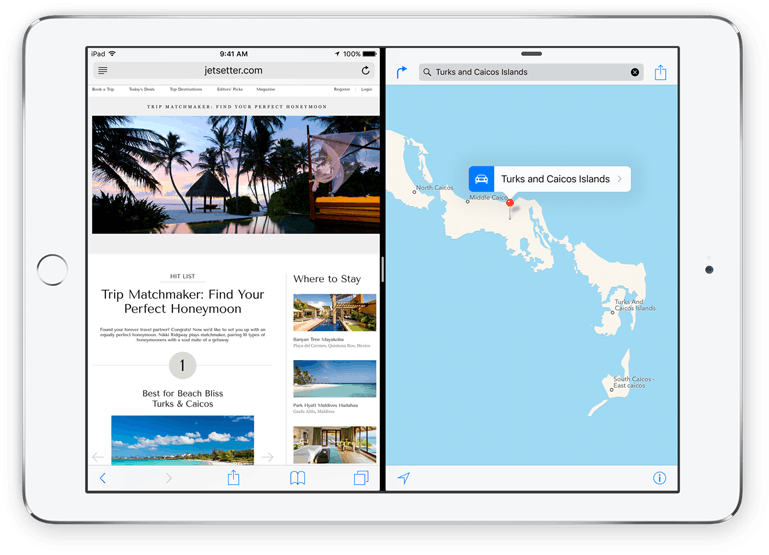 One of the most significant additions is multitasking for iPad devices. While the iPad experience does differ from using an iPhone a tablet should offer a lot more productivity and at last the iPad will be able to multitask. The first method is Slide Over which works with newer iPads and allows you to slide out a second app to do tasks such as answer a text or take a note. Picture-in-Picture is similar but will place a persistent video or FaceTime call in the corner of the screen so you can continue watching or chatting while using another app. Split View is much more useful but will only work with the iPad Air 2 and lets you run apps side and is what most people would imagine when they hear the word ‘multitasking’.

The iOS 9 keyboard has seen a few changes with a built-in shortcut bar and cursor control is improved with two finger input which basically turns the keyboard into a trackpad for moving around the cursor. There are many under the hood changes too with a new low power mode to get extra battery life and better CPU and GPU efficiency. Security is improved too and you’ll only need 1.3GB of space to install compared to 4.5GB with iOS 8.

When is it coming?

So far the only thing Apple have said is that iOS 9 will be coming this Autumn but like previous updates it’ll be released alongside the new iPhone so September is likely. The update will be free for existing iPhone users and come pre-installed on new iPhones once released. In the past older iPhones have struggled a bit with the latest software so if you’re looking forward to iOS 9 it may be time to upgrade. Take a look at our Sell My iPhone page to see how much you can sell your old one for.