Happy 10th Birthday to the iPhone 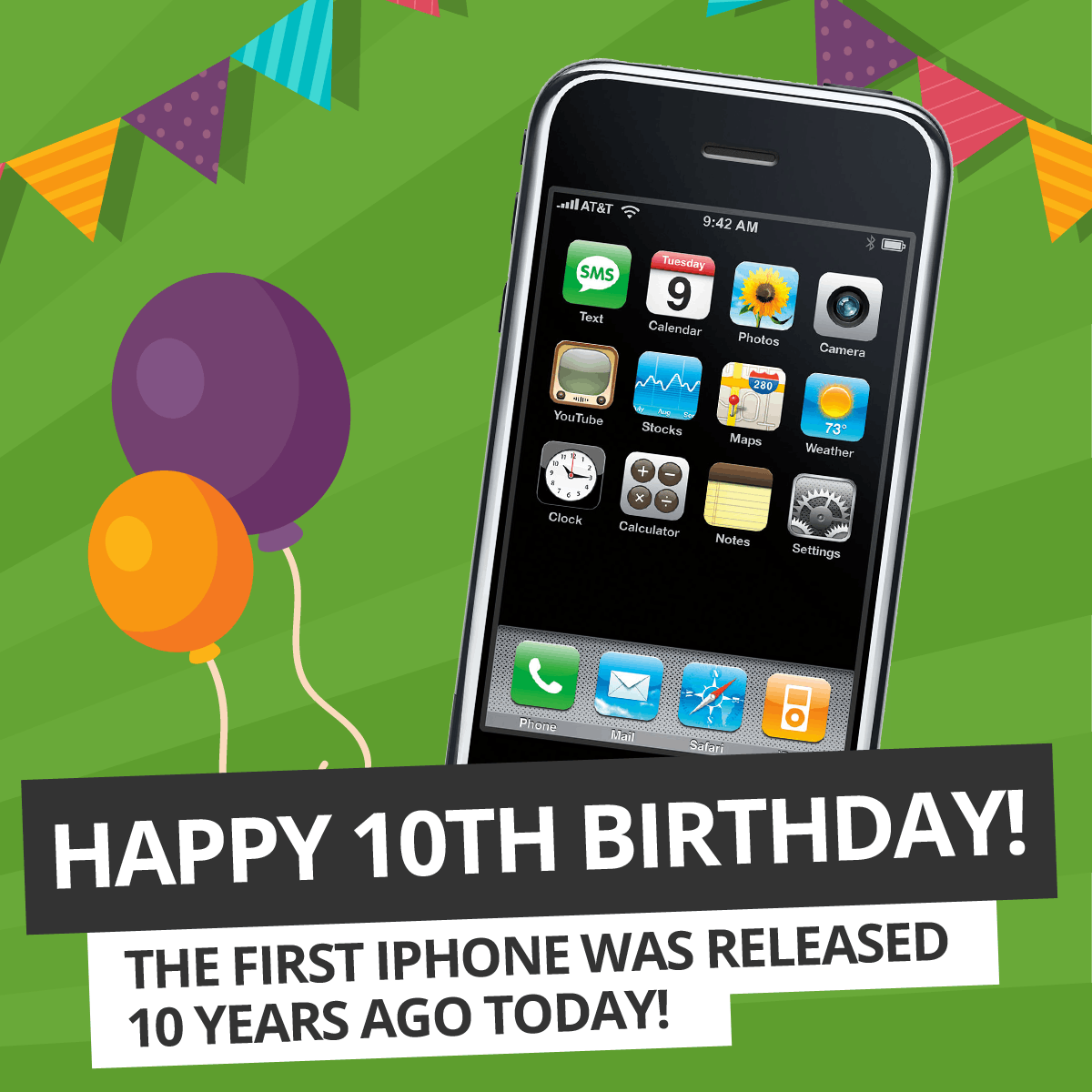 It’s the 10th anniversary of the Apple iPhone bursting onto the market, the seminal moment when we all turned into smartphone junkies. It’s amazing to think how have things changed since 2007 when the financial markets was about to crash and the iPhone 1 suddenly gave us the chance to walk around with a whole heap of computer power in our pockets.

29th June, 2007 was the date that will live long in the memory of all iPhone fans. It was the sleek design and the touch screen that got people all misty eyed, not to mention the high-tech power. Since then we’ve become so attached to our smartphones that separation can cause severe psychological damage.

From taking pictures, to texting friends, watching videos and doing a little online shopping, it can make you wonder how we survived before the iPhone came along.

Axiom Telecom carried out a bit of interesting research on what happens when you take away the smartphones of a group of strangers and put them in a room together.

One of the important things that smartphones in general have bought us is the opportunity to shop online, while on the move. According to the Telegraph, smart devices boosted online sales last year to a massive £133 billion in the UK alone.

This change over the last ten years has not only benefited consumers, it’s led to a whole range of e-commerce entrepreneurs taking the plunge and opening their own stores. With new mobile ready websites and greater access through Wi-Fi connectivity, we can shop almost anytime we like.

Innovative ways to pay that make our lives easier have come onto the market in recent times. Apple Pay has taken online banking that step further and made it easier to shop at the click of a button, or the tap of the phone. It’s given rise, perhaps indirectly, to the gig economy and changed the way we look at finance and security. It’s even made banks change their tune.

Apple have continually made waves in the market, often bringing to the forefront technology that was only used on the fringes, for example, Skype was around for many years before FaceTime, but the ease of use and intuitive nature of the iPhone made it into the public mindset. And that is not all, they have also brought to the fore, sleek designs, fingerprint sensors, the already mentioned apple pay, an App store that far out performed any other software store in the early days.

We Can Learn, Communicate and Engage with the World

Above all, the smartphone has revolutionised the way we communicate and who we engage with. It’s now possible to chat online with someone halfway across the world and get to know those from different cultures. We’re far less parochial in our approach to the world, especially younger people. Learning has also become decentralised and cheap – you can pick up a language with an easy to download app for just a few pounds and watch tutorials online while you’re travelling to work on platforms like YouTube, and Khan academy.

Of course, the iPhone also caused a revolution in development and there are now hundreds of different smartphone models out there to suit practically every pocket. It’s thought there will be 6.1 billion smartphone users by the end of the decade. Considering the revolution only started 10 years ago, that’s an astonishing statistic in itself.

Even Android Should Say Thanks

Even if you have no interest in Apple, and are sticking to Android, you should still be grateful to Apple, for pushing other companies to take strides in camera, screen and design of the mobile devices, Android owes a lot to Apple. The biggest card might be coming from their closest competitor. But from all of us here at Compare and Recycle, we are thankful that Apple are still around and still creating some of the best and most innovative mobiles in the market.