10 Cool Things You Can Do With Your Old Smartphone

Sometimes it can be a little too hard to let go of an old mobile phone, so we have some ideas for you to use phone as a dedicated tool for any of the following.

Why not give your old phone a new job with these 10 cool ideas.

We’re still in the early days of consumer virtual reality but it’s not difficult to set up on your smart phone. Simply buy a compatible kit online (lots of places have plenty of smartphone VR kits available,) and download the correct app onto your phone. It’s good to note that Gear VR will automatically install the Oculus app when connected for the first time.

Thanks to a stack of clever apps, it’s now possible to turn your phone into a working baby monitor or spy cam. A phone-based monitor has one big benefit for traveling parents : They can check in on their baby at any time. Make sure your Wi-Fi is protected and you are using an adequately protected network and account. Download an appropriate app onto your old phone and your current phone, set one up in the nursery in the desired position, don’t forget to connect it to the Wi-Fi and plug it into an outlet. Be sure to enable the app’s enhanced security features.

Setting up a dashcam is easy. Simply purcahse a phone mount for your car which can be purchased for cheap in most shops. Next you will need to find a suitable dashcam app. Luckily there are quite a few apps out there, so check your app store for the one that suits your needs. Make sure to check the laws of your country, as it is currently illegal in the UK to drive a car with a live camera feed in your field of vision, though there are many apps that work in the background behind a sat nav app. 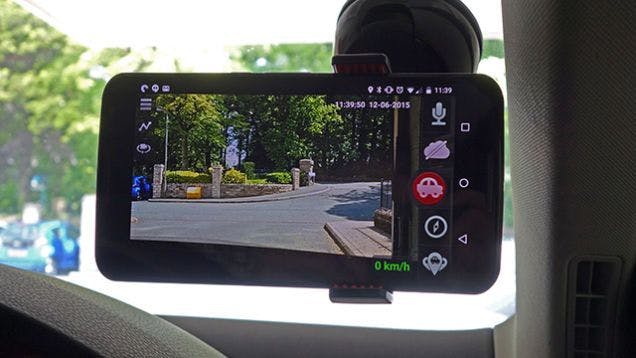 Apps like Remotemouse enable you to gain a universal remote for your devices, enabling functions such as a wireless mouse and portable trackpad. There are free and paid versions of Remotemouse, obviously with more options in the pro-version. Download the app to both devices (your phone and computer) and make sure they are connected to the same WiFi network.

Brain for a robot

There are many start-up companies now offering robotics using your smartphone as the brain. Such as the WowWee RoboMe from Nanabot, which will be able to play games, hold a conversation, and do basic face-tracking as long as your Windows Phone has a front-facing camera. Or the Romo from Romotive, which is advertised as a pet, toy and robotic avatar all rolled up in one.

For those with old android phones wishing to use their phones as a WiFi extender in the house, there is an app named fqrouter2. Download and launch the app, and turn on the Wifi Repeater. It will then start repeating WiFi signals. For Iphones (4 and later) you will need to jailbreak your device. Afterwards install MyWi 7 or PdaNet to be able to either share the data or create an access point.

All you need to create a streaming media centre is to hook your old smartphone up to a WiFi network and a few devices, such as network enabled HDTVs, smartphones, the PS3 and the Xbox 360. An app like Twonky allows you to create a media server directly onto smartphone allowing the shared media to be played back on all sorts of network enabled devices. Jailbreaking your old iPhone and installing the app XBMC also turns it into a full-featured media hub.

To unlock the fitness monitoring potential of your old device, all you need is the correct apps downloaded onto it. Your fitness levels, and activities will determine which app is best suited for you and there are many to choose from. Moves records things like daily steps, walking, running, and cycling, and provides an estimate of calories burned. Most apps available will record your activities by GPS, though paid versions offer more choice.

Use as a Spirit Level

Perfect for when you are in a pinch in need of a level, there is a whole host of apps available to turn your app into a precise and smart spirit level. There are plenty of paid versions available, but with a host of perfectly good free apps, it would be difficult to see why you’d pay for one. The only issue with all phones is the fact the sides are curved, so check which sides of your phone are level.

Recycle your phone into a radio player, using apps such as Pandora, spotify, wahwah, songza and swell. Mount it into a suitable dock, buy cheap speakers or using a jack to plug to your sound system. The choice of radio is varied, from talk radio, to music for just the right moment.

If you have any ideas for how you like to use your old phone, do share in the comments below.